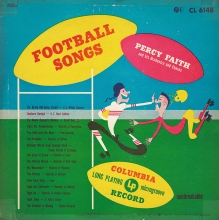 An expanded version of this album was released as Touchdown! (Columbia CL 6148) in 1958.

Almost alone among sports, the football game has been responsible for a large number of vigorous, hearty songs. Naturally, this stems from the colleges that have built football into a flourishing American enterprise, for colleges have long been fine incubators of lusty song. Many of the names of the composers may be lost in the ivied halls, but their songs still ring out of a Saturday afternoon with undiminished vitality.

In this collection of football songs, Percy Faith has selected sixteen representative tunes, four from the East, four from the South, four from the Middle West and four from the West. Almost any crisp Saturday afternoon in the autumn, these songs take their place among the moulting racoon coats, the fluttering pennants and the thermos jugs as part of the general excitement of watching twenty-two men (and more) push the proverbial pigskin around the field. Not only are these songs closely allied with the general excitement, they are part of that excitement, frequently giving rather more support and fighting spirit to the spectators than to the team.

Whether one delights in sitting in a stadium for football, or prefers to acquire his information about the game via electronics, these songs will all be familiar and welcome. Providing, as they do, a quick jump about the country, the songs will also recall the last-minute touchdowns, the extra-special date, the hotly-argued defeat, such things as these that are also indisputable parts of a football game. If it sometimes seems that the game gets lost in the welter of tribal customs, ask anyone who was there: he can give you every play.

Here, then, in one collection, is a cross-section of an American Saturday afternoon in October or November, played with exuberance by Percy Faith and his orchestra and sung with proper spirit by the chorus. One’s own college or university favorite may be missing, but these sixteen songs include some of the most popular and famous melodies that ever echoed across a campus. From kickoff to the final whistle, the spirit of great football games is captured in these performances with rousing effect. Listen now, as the band comes out on the field!