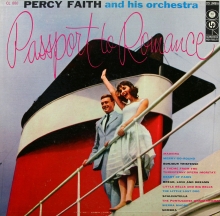 More and more the enchanting melodies and rhythms of European composers are gaining favor in America, and Percy Faith has had as much to do with this as anyone. Two of his biggest and earliest hits were adapted from French sources — All My Love from Bolero and The Song from Moulin Rouge — and a splendid collection called “Continental Music” remains one of the most popular albums in the country. The distinctive flair that Percy Faith has for rich, sonorous arrangements is in large part responsible for this, for, however colorful the sound, he never lets the melody get lost or distorted.

In this program, he presents a variety of continental themes, each with its own special attraction. Madeira, with its unusually catchy phrase, delineates the atmosphere of those charming islands belonging to Portugal, while Merry-Go-Round brings with it the excitement and sweep of a Parisian carousel. This particular melody is also known as La Complainte de la Butte, and is derived from the movie “French Can-Can.” Next comes Bonjour Tristesse, suggested by the best-selling book of the same name and carrying, under its Latinistic rhythm, reflections of the worldly wistfulness of the novel. Moritat, recently one of America’s biggest hits, was written in 1928 by Kurt Weill as part of his music for “The Threepenny Opera,” and even years later suggest the strange, haunting atmosphere of Berlin. The Faith setting underlines its odd melodic contagion. Coeur de mon Coeur is the original French title of Heart of Paris, which Percy presents in a persuasive setting that enhances its sentimental waltz tune. In Bread, Love and Dreams, Italy is represented by a theme from the memorable comedy starring Gina Lollobrigida, a theme as merry and lusty as the film.

In the second half of the program, Germany appears again on the passport, with Glocke und Glocken, Americanized as Little Bells and Big Bells, a light-hearted piece based on chime sequences. The Little Lost Dog returns the program to France, with a selection from the “Chiens perdus sans collier.” Here the skillful Faith arrangement points up the sweetly wistful line of the song; few countries are as productive of charming waltzes as France, almost all of them delightful. Again the musical journey travels to Italy for the moody Scalinatella, a richly brooding song played over a Latin rhythm, a combination especially popular in Italian music. Returning to France, the program next offers Portuguese Washerwomen, a song which helped Jacqueline François to win a Prix du Disque in 1955. Despite its title, it is a typically jaunty French tune, such as one might readily hear along the boulevards. In Portugal once more, Percy Faith presents a sumptuous tango called Sierra Madre, or Luna Gitana, and concludes the program with still another tango, Sombra, wherein the vivid, spirited playing belies the implication of the title.

As in his many other fine Columbia collections, Percy Faith offers these numbers in colorful, exciting arrangements. Whether he is conducting music such as this, or waltzes, Latin favorites or the instrumental scores of such Broadway shows as “Kismet,” “My Fair Lady” or “House of Flowers,” he brings to them all a flavorsome interpretation that has made him one of America’s favorite conductor-arranger-composers. Moreover, in his accompaniments to popular vocalists, the same sure taste is at work. With this collection, he provides everyone with a passport to romance, to melody and to listening pleasure — sit back and enjoy the journey.