Tara's Theme From Gone With The Wind / Jealousy

Tara's Theme From Gone With The Wind / Jealousy 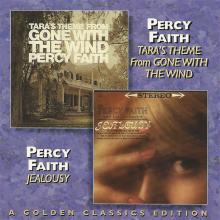 Released by Collectables on August 5, 1997

This two-on-one includes a complete reissue of Tara's Theme From Gone With The Wind (tracks 1-12) and a partial reissue of Jealousy (tracks 13-23); the song "Tia Juana" does not appear due to time restrictions.

Rock ‘n’ roll is generally presumed to be a young person’s game, so it may come as a surprise to learn that the best-selling instrumental of the rock era was a lush, richly orchestrated ballad credited to a 52-year-old conductor. Percy Faith was the conductor and his hit was The Theme From “A Summer Place.” It sold well over a million copies and topped the Bilbaord pop chart for nine weeks in early 1960.

Born in Toronto, Canada, April 7, 1908, Faith learned to play the violin by the time he was 7. He went on to study at the Toronto Conservatory of Music. He also played piano in a silent movie theater and the violin with several Canadian orchestras.

When Faith was 18 he severely damaged his hands trying to put out a fire at a clothing store operated by his sister. His violin-playing days were over but he continued in music, working as a conductor and arranger, joining the Canadian Broadcasting Company in 1933. He had his own show – “Music By Faith” – that was so popular in Canada it was picked up for broadcast in the U.S. by the Mutual Broadcasting System.

Faith relocated to the United States in 1940 as musical director for a radio series called “The Carnation Contented Hour.” In 1950, he was hired by Columbia Records’ head Mitch Miler to serve as an arranger and conductor for the label’s staff orchestra.

The Faith touch was soon heard on huge pop hits for Tony Bennett, including Because Of You (1950), Cold Cold Heart (1952) and Rags To Riches (1953). Faith also worked on big singles for Guy Mitchell, Rosemary Clooney, Frankie Laine and Doris Day.

Miller also encouraged Faith to record on his own and his first success came in 1950 when I Cross My Fingers, with a vocal by Russ Emery, was a Top 20 hit. All My Love, also issued in 1950, went Top 10. Faith closed out the year with Christmas In Killarney, which was a Top 30 song.

The hits kept coming in the early ‘50s. In 1951, he went Top 10 with On Top Of Old Smokey which sported the voice of Burl Ives. He also did well with When The Saints Go Marching In. Delicado, issued in the spring of 1952, went to No. 1 for a week.

In the spring of 1953, Faith’s recording of Swedish Rhapsody went on the charts where it would peak at No. 21. It’s flip side, Song From ‘Moulin Rouge’ (Where Is Your Heart), with a sweet vocal by Felicia Sanders, went on the Billboard list a month after Swedish Rhapsody. It would stay there for 24 weeks – 10 at No. 1 – and be cited as the best-selling record of 1953.

Later in ’53 Faith had a Top 20 record with Return To Paradise. Many Times was also popular that year. In 1954 he charted with Dream, Dream, Dream and The Bandit.

While Faith’s singles were being challenged by Elvis Presley and his pals, the conductor was doing well on the album charts. Adults were taken with his lush arrangements of standards and “Passport To Romance” was a Top 20 in the summer of 1956. “My Fair Lady,” with songs from the enormously popular Broadway musical, did even better, going Top 10 in 1957. A collection of songs from “Porgy And Bess” did well in 1959. In 1960, both “Bouquet” and “Jealousy” were Top 10 sellers.

In the early fall of 1959, Faith – who continued to release an occasional single – recorded the them from Warner Bros.’ “A Summer Place.” It was a steamy story of young love starring teen sensations Sandra Dee and Troy Donahue and adults Dorothy McGuire, Richard Egan and Arthur Kennedy. The single took almost six months to edge into Billboard’s Hot 100 in January 1960.

Once it got on the charts, the record moved quickly, and, after less than two months, it settled in at the top of the rankings for a nine-week run. It also won a Grammy as Record of the Year.

Despite his massive hit, Faith didn’t release an album based on the single. But he didn’t seem to need to as his albums of lush mood music continued to sell very well. In 1961, he was back in the Top 10 with music from “Camelot.” That was followed by popular collections featuring the music of Mexico and Brazil.

In 1963, Faith slightly altered his musical direction. He was still doing lush collections of instrumentals, but he switched from standards as his source to the Top 40. “Themes For Young Lovers” featured his 1960 hit of the same name and string-filled arrangements of teen hits like Go Away Little Girl, All Alone Am I and On Broadway. The sparkling sound of the album pushed it to Billboard’s Top 15 and eventual gold record status.

Faith continued to offer his versions of pop hits on “Shangri-La” and “Great Folk Themes.” In 1964, he was back with “More Themes For Young Lovers.”

Through the early ‘70s, Faith continued to record popular albums featuring his orchestra and chorus, including “Love Theme From Romeo And Juliet,” for which he received a 1969 Grammy for Best Contemporary Performance by a Chorus.

Faith died of cancer February 9, 1976. He left a huge legacy of great music during his years on Columbia and Collectables is pleased to present some of the best of that work on this tribute to a man who spent more than 40 years bringing fine music to the work.