Tara's Theme From Gone With The Wind 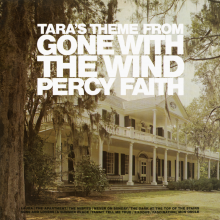 This album was released with multiple covers; the original was a text cover. The image above is from a reissue.

The suave arrangements of Percy Faith have propelled three superb records over the million-seller mark: Theme from “A Summer Place,” “The Song from Moulin Rouge” and “Delicado.” Moreover, it was Percy himself who adapted “The Song from Moulin Rouge” from the original movie score, and whose music for “My Heart Cries for You” provided singer Guy Mitchell with his first million-selling record. This collection of great themes from motion pictures, including Percy’s latest composition, the theme from “Tammy Tell Me True,” is in the same great Faith tradition, sumptuous, tasteful and exciting. Percy Faith was born in Toronto, Canada, on April 7, 1908. He began his studies early, and worked so studiously that by the time he was eleven, he was earning three dollars a night (plus carfare) as a pianist for silent movies in a Toronto theatre. At fifteen, Percy made his concert debut as a pianist in Massey Hall. As he continued his studies, he discovered a growing interest in arranging and composing, which in time outran his desire for a pianistic career. In 1933, he was appointed staff conductor for the Canadian Broadcasting System, where he remained until 1940 when he moved to the United States to become conductor of “The Contented Hour.” In 1947, Percy became conductor of “The Pause That Refreshes on the Air,” later for “The Woolworth Hour.” Other radio programs and guest appearances with such orchestras as the NBC Symphony further enhanced his reputation. He joined Columbia Records in 1950. Conservatory-trained Faith follows a composer’s intentions so sympathetically that he never distorts a melody. He enhances it, adding exotic color with instruments, creating constant surprises with counterpoint of tunes or intricate rhythms. His inventions are so considerable that a Percy Faith arrangement can be virtually a fresh composition, yet it never masks the original. The sound of his massed violins, his lustrous brasses and his impeccable tempos is unmistakable.