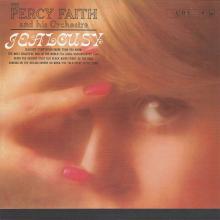 This dazzling program of orchestral virtuosity presents twelve of Percy Faith’s finest arrangements. Famous through the world as conductor-arranger of such million sellers as Theme from A Summer Place, Delicado, and The Song from Moulin Rouge, Mr. Faith has selected twelve fine songs typical of the wide range of American popular music — sentimental, sensuous, sprightly, lyric, moody — and arranged them to exploit the fabulous sound of his orchestra. The shifting of lights and colors in the orchestral palette is altogether fascinating, a thrilling example of Percy Faith at his finest.

Jealousy, which Percy has selected to open his program, is one of the world’s most popular melodies. It was written by Jacob Gade, and first heard in the United States in 1925. Temptation was written for the movie “Going Hollywood” with Bing Crosby and Marion Davies in 1933. Nacio Herb Brown was the composer, lyrics were by Arthur Freed. The source of More Than You Know (lyrics by William Rose and Edward Eliscu, music by Vincent Youmans) was the 1929 musical production, “Great Day.”

Richard Rodgers and Lorenz Hart make their first entry in Percy Faith’s program with The Most Beautiful Girl in the World from “Jumbo” of 1936. This circus extravaganza starred Jimmy Durante, and was the last production to appear at the famous New York Hippodrome. Bud Green and Raymond Scott are the composers of the intriguing Tia Juana (1936). Duke Ellington wrote Sophisticated Lady, with lyrics contributed by Irving Mills and Mitchell Parish.

Cole Porter wrote the score for “Jubilee,” a 1936 musical comedy, which provided Begin The Beguine. (It was not until some years later that the song attained its real popularity.) 1942 was the year of That Old Black Magic, with lyrics by Johnny Mercer and music by Harold Arlen. It was sung in the movie “Star Spangled Rhythm” by Johnny Johnston, and danced by Vera Zorina. Two years later (1944) Mr. Arlen and E. Y. Harburg wrote the charming Right as the Rain for the musical comedy “Bloomer Girl.”

Two more songs by Rodgers and Hart are next on Percy Faith’s program. The first, Dancing on the Ceiling, was written in 1930 for the Ed Wynn musical “Simple Simon.” Eliminated during tryouts, the song was finally heard in the London production of “Evergreen.” “Babes in Arms” (1937) was the source of Where or When, introduced by Mitzi Green and Ray Heatherton. Percy Faith concludes his program with a blithe melody by Jerome Kern, with lyrics by Oscar Hammerstein 2nd: the charming I’ve Told Every Little Star from the 1932 success “music in the Air.”

Percy Faith was born in Toronto, Canada, on April 7, 1908. He began his studies early, and applied himself so assiduously that by the time he was eleven he was earning three dollars a night—plus carfare—as a pianist for silent movies in a Toronto theatre. At fifteen, he made his concert debut in Massey Hall, and thereafter continued his piano work, along with a new-found interest in arranging for orchestras. In 1933, Percy was appointed staff conductor for the Canadian Broadcasting Corporation, remaining until 1940, when he moved to the Untied States to become conductor of “The Contented Hour.” That same year he became a citizen. His career moved steadily forward, and in 1947 he became conductor of “The Pause that Refreshes on the Air.” Other radio programs, and guest appearances with orchestras such the NBC Symphony further enhanced his reputation, and in 1950 he joined Columbia Records.

Although I had purchased Percy Faith's All-Time Greatest Hits (2-Lp set) in the late 1980s, I wasn't a fan and really didn't have any love for orchestral music. The set got shelved, somewhere between The Cars Greatest Hits and Debbie Gibson's Electric Youth, other Lps purchased to fulfill obligations to the now-defunct Columbia Record Club, never to be played again.

It was the Collectables 2-on-1 reissue of this album in the late 1990s that got attention and made me warm up to Faith. It's one of my favorite Percy Faith albums.