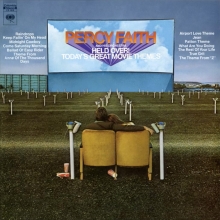 The term "mood music" seems to have fallen into disuse, and it is just as well. It held a connotation of sugary blandness, and it was applied too widely, willy-nilly, to the music of anyone who scored popular music for large orchestra including strings.

The fact is that the best of America’s popular music (and the world’s, for that matter) deserves full-orchestra treatment. We tend to forget that when, in the 1940’s, the first such recordings were made, they struck people as being unusual, even pretentious. Sometimes, alas, they were pretentious.

But a few men refined this kind of writing until it became a kind of high art. My personal favorites are three men: Paul Weston, Robert Farnon, and Percy Faith.

You can treat this kind of music casually, if you wish, and sometimes, indeed, it makes perfect background for cocktail parties. But if you want to listen into the music, you’ll hear some remarkably skilled recomposition.

I always approach a new Percy Faith album with pleasurable anticipation, knowing I’m going to encounter something that can be listened to at two distinctly different levels. Hearing his inner melodic lines, hearing how perfectly he ties up every loose end (a characteristic he has in common with Farnon), I simply groove. Every detail is perfect. For, aside from enormous skill, Percy Faith has impeccable taste. Whereas some excellent orchestral technicians have to throw everything they know into each arrangement, Percy Faith also knows when to cool it – when to be simply simple.

There have been albums of movie themes before. In fact, Percy Faith has written some of them. His are always different from anyone else’s. He finds fresh and unexpected approaches to the material. This album is no exception.

There is a paradox in the career of Percy Faith. He has been enormously successful; but he hasn’t been properly recognized. There is no dearth of music criticism in America: albums and artists who deserve little more than an “Oh, yeah?” reaction are analyzed ponderously. This middle ground of popular music, what is inaccurately called “easy listening” music, goes almost undiscussed. Maybe this is because not enough writers can really hear such things as counterlines.

Even Percy Faith’s movie score for “The Oscar” was under-recognized. If you haven’t got that album, by all means get it. It contains, among other excellent tunes, Faith’s beautifully haunting maybe September. It is a remarkable example of the application of popular-music techniques and styles to motion-picture scoring. It is one of my very favorite albums.

Whether putting songs into a movie, as Faith did in that case, or extracting them from movies, as he does in this case, Percy Faith is one of the most masterful writers in American popular music.

If you’ve bought this album, you have probably enjoyed his music in the past and so know what you’re going to hear. If you’ve listened to Percy Faith’s albums only casually, for light pleasure, may I suggest that you now listen deep? This man is more than an enjoyabkle arranger: he’s an important composer.

(One of our outstanding lyricists, Mr. Lees’ film collaborations include scores with Johnny Dankworth and Lalo Schifrin.)