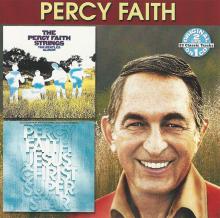 Released by Collectables on November 19, 2002

The four creative minds of The Beatles (John Lennon, Paul McCartney, George Harrison and Ringo Starr) and “Jesus Christ Superstar’s” two originators (Andrew Lloyd Webber and Tim Rice) are unanimously considered by both musicologists and casual listeners as among the very best composers of the last 50 years. Their music has been, to this day, the soundtrack of our lives. They are continually paid homage by other artists who record interpretations of their music.

In 1970 and 1971, one of Columbia Records’ most prolific and popular musicmakers, orchestra leader Percy Faith, produced two projects, “The Beatles Album” and “Jesus Christ Superstar” that reflected the public’s fascination with the two, and the joy their music brought to millions.

Since 1950, when he arrived at Columbia as both a recording artist and music director, the Toronto-born Faith began producing albums of tunes that were linked either conceptually, lyrically, or through association with a specific artist, project or part of the world. Albums like “Viva! The Music Of Mexico,” released in 1958, and “The Sound Of Music,” a 1960 issue, focused on their subjects to great effect, achieving commercial success. Faith would utilize the formula of translating well-known melodies into fantastically ornate and richly wrought orchestral works of dynamic beauty. His distinctive voicings for strings and innovative recording techniques made him the undisputed leader in the field of recorded instrumental music. He treated pop with the dignity of classical music, and made records that have withstood the test of time.

What can be said about the Beatles that has not been already said by hundreds of writers? No one alive during their time will ever forget them. Their songs combine romance with fancifully imaginative concepts in a refreshing innocence that is at once strange, yet completely memorable. Combine with a joie de vivre that was a trademark of the Sixties, and you have music that resides at pop’s pinnacle.

The delight of surprise abounds in Beatles music, and “The Beatles Album” is full of creative interpretations of their music. The pizzicato strings of Eleanor Rigby, the quiet grace of Because, which is based on Beethoven’s Moonlight Sonata played in reverse, and the unlikely choice of The Ballad Of John And Yoko, one of the group’s more controversial tunes, are highlights. The musical contributions of Ted Nash on saxophone and Buddy Childers on flugelhorn should not go unnoticed, as they excel in their solo spots.

As the son of William Lloyd Webber, the director of the London College Of Music, Andrew Lloyd Webber was exposed to “good” music at a tender age. He would later train at the Royal Academy Of Music, an unlikely place for a “pop” songwriter to begin his career.

In the 1970s, “concept” albums were in vogue. A record album was a relatively inexpensive way to stage a musical. His first effort, “Joseph and The Amazing Technicolor Dreamcoat,” received critical kudos but at the time remained unproduced. The second attempt to write a musical by Webber and lyricist Tim Rice was a world-wide ground-shaking event. “Jesus Christ Superstar,” released in 1971 first as a full-length recording project, had all the right elements. A fresh, melodic score with the brash swagger of great rock music made the piece a natural for theatrical production, as well as being based on the most famous “book” and lead character in history.

The musical “Jesus Christ Superstar” re-energized Broadway, and paved the way for later Andrew Lloyd Webber masterpieces like “Evita,” “Cats,” “Phantom Of The Opera,” “Aspects Of Love,” and “Sunset Boulevard.” Andrew Lloyd Webber is today the reigning monarch of the musical.

His “Jesus Christ Superstar” partner, Time Rice, has also fared well in the theatre. Besides their collaboration on “Evita,” Rice has the album / musical “Chess,” written in collaboration with Abba’s Bjorn and Benny, and his recent work with Elton John (“The Lion King,” “Aida,” and “The Road To El Dorado”) as evidence of his outstanding contribution to the history of Broadway and the film musical.

In the capable hands of a master like Percy Faith, the music of The Beatles and Andrew Lloyd Webber and Tim Rice is meticulously presented. They are our modern-day Schubert and Gershwin, creating popular songs for the ages. Here now are two landmark examples of their brilliant careers, “The Beatles Album” and “Jesus Christ Superstar.”