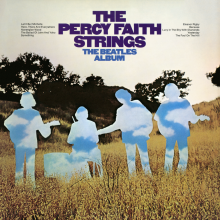 The Percy Faith Strings, born a dozen years ago in a golden and inevitable album we called Bouquet, are, indeed, the essence of the Percy Faith writing. In four wedges of first and second violins, violas and cellos, forty-eight of the finest string players in the world spread out from the podium like four exquisite ribs in a delicate fan of sound—a Beatle ballad as familiar as a friend woven into counter melodies so precisely right that they too sound familiar. Then, the startling individuality of a flugel horn, an alto sax, a trombone or a flute appears warm and confidential, then disappears again into the flowing strings. Percy Faith, the composer, the arranger, the conductor, distills in this orchestra these complimentary talents, which, for him, are best expressed by the bows of a family of strings.

The songs of The Beatles, which “play for strings” was the criterion. The most memorable and meaningful compositions of the past decade of important music are the program. To some these performances simply reinforce what they have always known—that these songs are beautiful. To some others this new and flattering expression of the songs brings, at last the new realization. To me, and probably to you, the setting fits the gem, and the listening is lovely.

And isn’t it nice to know that not everything in the air waters the eyes, stings the membranes, shatters the atmosphere? This graceful, airborne music enhances our environment and charms the surface of the earth just as Thoreau’s flute, floating above Walden, charmed the perch in the pond.