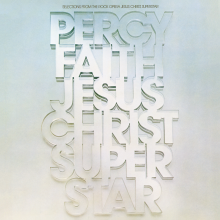 Barefoot, bearded and braless, denied self determination and in search of a hero or a god with answers and the foolish courage to face their tormentors while they shouted encouragement, a desperate people found Jesus Christ, applauded his resolve, begged for his help, and whooped at his downfall. Those closest to him understood him better and tried to soothe and to council, to warn and to understand. Some moved closer as defeat seemed inevitable. Some stepped back. Many looked to either side to be certain support was not far away. Others decided it was more prudent to save skin than soul.

In seven days, the final week of his life, he was greeted with the music of triumphant confidence in his powers to save, the exuberance a winner inspires, the selfishness a me-too-er displays, and, finally the loneliness of a loser. It is no wonder that this man, this calamitous week, and these all too familiar faces have provided the impetus for the most powerful creative accomplishment of the rock generation. The wonder is that Tim Rice and Andrew Lloyd Webber have said so much so beautifully.

In this time of the poets it is time now for the players to express themselves and to remind us once again of the power of instrumental music to convey despair and love and hope, even hypocrisy and greed and fear. And it is all here in these brilliantly orchestrated themes from the rock opera. Even the majesty of the overture is diluted by heckling, the friendship of Judas marred by timidity and doubt.

On the first day of that fateful week What’s The Buzz is orchestrated into a babble of cries superficial and filled more with curiosity than confidence. The urgency of “Let me in,” the desperation of “What’s happening?” are brilliantly buzzed in the brass. And the selflessness of Mary Magdalene, comforting and reassuring without fully understanding, is expressed in Everything’s Alright. Only the quiet ending belies the title.

But the crowd is still with him, and Hosanna is full of enthusiasm and reassurance, a mixture of awe and intimacy the orchestra can achieve so well. In Simon Zealotes it is “Me too” with abandon for a while, then silent majority. It was quite a Sunday.

Pilate’s Dream seems to reflect the wonder and the fear dreams leave in their wake, lingering in low strings to be remembered later. And the “Buy!” and the “Beg!” of The Temple, the hypocrisy of the mass contrasted with the honesty of the man are engraved in clashing sounds.

Mary’s song I Don’t Know How to Love Him, expressing at first despair, remembering love, building to hope has been set by Percy Faith to preface Jesus’ doubt, His own need for reassurance and his grim resolve in Gethsemane. Here the orchestra is as lonely as a man, as coldly curious as a doubting crowd.

The week is over, and the Trial Before Pilate is relentless and awful, taunting and loveless. The whole world knew the ending anyway, but the Faith orchestra articulates even the lashes.

Now the Overture seems to have lost its confidence, laced with the needling of Judas and the disdain of the turning mob. But the orchestra’s expression of Jesus’ forgiveness and faith is gentle and eloquent and personal. The players have here replaced the poets to tell this story in a shining new dimension. But the words were not forgotten.