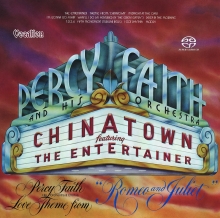 This is a hybrid SACD that can be played on standard CD players (CD layer, stereo only) or SACD (both stereo and multichannel). The 5.1 layer is only 4.0 channels from the quadraphonic master.

This disc can be purchased directly from Dutton Vocalion.

Audio sample from this SACD (first half is rear channels of quad mix, second half front channels):