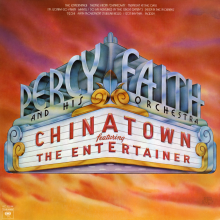 Nine of the selections in this album were previously released in Percy Faith's album The Entertainer, KC 33006
"Theme From 'Chinatown'" is a new addition.