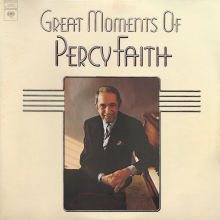 This 2-Lp compilation contains no new material and therefore does not appear under Percy's list of original albums. It was released shortly after Percy's death in 1976 and includes extensive notes by Percy's longtime producer, Irving Townsend, and more than two dozen rare photos.

The photographs can be viewed in the photo gallery.

Twenty-five years ago a tall, slender, black-haired Canadian with wo unlikely and therefore memorable names arrived for his first day’s work as Director of Popular Music at Columbia Records. He rode to the fourth floor of the Columbia Building at 799 Seventh Avenue, a 52nd Street corner surrounded by music publishing houses, rehearsal studios, and The Hickory House, then a musicians’ hangout, and was shown to a small center office along the north corridor reserved for the company’s producers. In the large corner office just down the hall Mitch Miller, who had hired him, was beginning his Columbia career as Director of Popular A&R. Miller had been hired away from Mercury Records by then Executive Vice President Goddard Lieberson. Next to Miller’s office was another large room occupied by Joe Higgins, veteran A&R producer and former assistant to Miller’s predecessor Manny Socks. At the opposite end of the corridor was the office of George Avakian, then Columbia’s resident jazz collector and producer of classics by Goodman, Ellington, Beiderbecke and Armstrong. My office, smallest of the cubicles, was between Avakian’s and the new Music Director’s. “I was impressed and a little scared,” Percy Faith remembered. “I didn’t even know what Mitch expected of me.”

In 1950 the name Percy Faith was not unfamiliar either to American musicians or to the American public. He had recorded briefly for Decca in Chicago in 1944 while his orchestra was featured on a widely heard weekly show called The Carnation Hour, sponsored by a manufacturer of condensed milk. During the seven years he arranged and conducted at the Carnation Hour music, his guests included such stars as Benny Goodman, Duke Ellington, George Shearing, Louis Armstrong, Nat Cole, Count Basie and Erroll Garner. Between 1947 and 1949 Faith replaced Andre Kostelanetz in New York as the conductor of the Coca-Cola sponsored network radio program where he conducted for such featured guests as Robert Merrill, Eleanor Steber, Richard Tucker and Gladys Swarthout.

But before his arrival at Columbia to accept the $200-a-week job under Mitch Miller, Percy had been out of work for two years. His was a large and expensive orchestra, and he would not do without his favorite section, the strings. Moreover, Percy was not the typical, highly publicized and high-living bandleader of the day. He was a soft-spoken, gentle man whose hobbies were fishing in the streams of Canada and playing golf whenever he had a day off. At the end of each working day he hurried home to Long Island and his wife and two children. While his new assignment was to assist Mitch in the search for material and to arrange for and accompany the growing list of singers Miller was signing, no one, least of all Faith, expected that he would remain under contract for the next quarter century, earn countless gold records for his single hits and his astonishing variety of albums, and become for musicians and public alike a master of orchestral composition, arranging and conducting.

Percy began his Columbia career by opening his office to every publisher with a song to sell. Mitch Miller quickly enlisted his talents to accompany the label’s singers, including Tony Bennett, Frankie Laine, Rosemary Clooney, Jerry Vale and Johnny Mathis, whose hits of the 1950’s were made possible in large part by Faith arrangements. It was during this period that Percy wrote the Guy Mitchell hit song “My Heart Cries For You,” as well as recording his own first his with his version of “The Song From Moulin Rouge,” featuring the voice of Felicia Sanders.

But Faith was still an instrumental writer, as the second side of “Moulin Rouge” indicated. “Delicado” told more about his future than anything else he had recorded during the first years at Columbia. It revealed on of Faith’s true musical preferences, the complex, impulsive rhythms of Latin American music. “I can’t explain how a Toronto boy fresh out of the conservatory had such a feeling for Latin music,” he said. “Maybe I’d been snowbound too long.” Coinciding with Faith’s first hit was the new demand for popular long-playing records, and Percy’s first albums of Latin and Continental music were well received. He was now not only a Columbia employee; he was a Columbia artist with an audience of his own.

The mid-50’s established Percy in yet another area of orchestral music in which he was to excel. Instrumental albums of the music of Broadway found a large audience who seemed not to miss the lyrics, who welcomed the big sound of Faith’s orchestra, who bought Percy Faith versions of the scores of “Kismet,” “My Fair Lady,” “The Sound Of Music” and “Camelot.” Also, Percy arranged the music of George Gershwin and recorded a two-record set that remains one of the most beautiful of all Gershwin collections.

But, in particular, it was Faith’s writing for strings which identified his style. I remember Duke Ellington joining me in the control booth during one of Percy’s recording sessions. I was surprised to see Ellington, a night creature, appearing at any but his own recording date.  “I want to learn how to write for strings,” he mumbled as he sat listening. It was this magical string writing that convinced us to record Percy’s first all-string orchestras in the gold-record-award album “Bouquet.” And it was “Bouquet” that led to a best-selling series of string albums, culminating in the 1960’s with string arrangements of the Beatle hits.

At the end of his first decade at Columbia Percy recorded “The Theme From ‘A Summer Place’,” an instrumental single at the opening of the vocal-rock era in popular music. It became his biggest hit, adding a new young audience for his music. In 1960 Faith moved his family to the west coast to work with me in the new Columbia studios in Hollywood. And to begin his second decade of recording he chose much of the best music from the screen for his album catalog. Settling into California golfing weather, returning each summer to fish and to visit his relatives in Canada, he was at last established as a composer, arranger and conductor of his almost-symphonic-size orchestra. He began to play concerts both in this country, where he filled the Hollywood Bowl each summer season, and abroad, where he conducted the symphony in La Scala. He was a world-wide star; his records heard in every country.

Percy Faith’s days of accompanying singers were over, or so he insisted. But it was in our early days on the west coast that I asked him to do the almost impossible—accompany Mahalia Jackson with full orchestra. Hers was to be an album of Christian hymns and anthems, the first time Mahalia had ever sung with strings. “I can’t sing opera,” she cried to me over the telephone from Chicago. “I don’t play gospel,” Percy reminded me in my office. Nevertheless, for me, for Mahalia, for the challenge itself he agreed, and Mahalia arrived by train in Los Angeles, filled two taxis with herself, he erstwhile accompanist Mildred Falls, and her luggage, and disembarked at the Sunset Boulevard entrance to Columbia shortly afternoon one Monday in 1960. Standing on the sidewalk surrounded by her suitcases, Mahalia searched for cab fare, then noticed a tall man walking along the sidewalk toward her. She had no idea who he was, but asked, “Will you lend me five dollars? I’ll pay you back. I’m Mahalia.” The man handed her the money. “I’m Percy Faith,” he told her. And so they met. The album “The Power And The Glory” was the result, and it remained Mahalia’s favorite for the rest of her life.

In the mid-60’s Percy Faith changed his recording style again, or rather he added a new dimension to the man successful variations of his musical personality. Recognizing both the importance of the new generation of young record fans and the beauty of much of their music, he began to make albums of contemporary melodies suitable to his orchestra, and, because much of the appeal of this music lay in its poetic lyrics, he added a chorus of singers. The records were unmistakably Percy Faith, filled with his trademarks: string voicings which produced counter melodies as beautiful as the tune itself, decorative comments by flutes and vibraphone, and, of course, the exotic rhythm instruments which had first excited his audiences twenty years earlier. Only the sound of a girls chorus was added, but the resulting albums have been enthusiastically received by Faith fans unborn when “Delicado” was first recorded.

On Monday, February 9, 1976, as he was preparing for his twenty-sixth year of recording for Columbia, Percy Faith died of cancer in Encino, California. The presence of the disease had been known to him and to his family and close friends for several years, and he had been undergoing periodic treatments. Biologists and sociologists mark the crucial difference which separates the man from other life forms by celebrating the creative human mind and its accomplishments as the true measure of our superiority. Certainly, Percy Faith’s career left the world richer. He made a creative difference. But while all men live uniquely with the foreknowledge of death and the burden of anticipating it, few, aware as he was of its imminentness, shun self pity, refuse to alter or to modify the pace of their lives. Percy went on making music, touring the world, planning the continuity of his career. Typically, also, he continued to be the gentle, concerned and generous friend to all who will miss him.

He died with several years remaining of his Columbia recording contract. But this memorial album, representing twenty-five years of his records, is a unique tribute, rare especially in so-called popular music. Why Percy Faith was able to sustain his popularity, to accumulate generations of dedicated listeners, is difficult to explain in words. But not in his music. Except for the titles, you will find it almost impossible to decide which of these marvellous performances was recoded recently, which two decades ago. All are timeless. All are forever preserved on phonograph records which in our century have at least made the art of the performing musicians as permanent as the pyramids.