Your Dance Date With Percy Faith 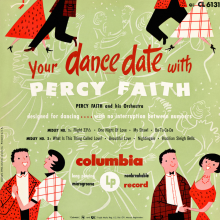 This album was recorded in New York City in May 1950. The tracks on this Lp are presented as medleys segued by a solo piano:

These titles were reissued on the 10" Lp Fascinating Rhythms (Columbia CL 6203) in 1952 as individual tracks with no piano segue.

Columbia "Dance Date" and "Dance Parade" records were part of a series of records by many artists.

In another of the series of Long Playing Records designed and recorded especially for dancing, Columbia presents Percy Faith and his orchestra in eight melodious selections. These medlies are intended to give dancers a complete dance set on one side of a 331⁄3 Long Playing Record, and to provide nondancers with music that is as exciting to listen to as it is to dance to.

Rarely do dancers find themselves provided with the sort of music that Percy Faith presents in this collection. For here is a full concert orchestra, playing arrangements of extraordinary color and complexity, in strict dance tempo. Such full-bodied music is generally reserved for “listening” programs, where the conductor may take liberties with the tempo. But instead Percy Faith has designed two medlies for his large orchestra that exploit their full resources and yet give the dancer a series of toe-tickling beats. Each medley contains a fox trot, a waltz, a samba, and a rumba, and two of the numbers — Flight 331⁄3 and Brazilian Sleigh Bells — are Faith originals.

The conductor of these rich orchestrations, Percy Faith, was born in Toronto, Canada. At the age of seven he began studying the violin, and soon added the piano to his musical accomplishments. At ten he gave his first concert, and later played in movie houses, accompanying silent films. After his graduation from high school, he began playing with various Canadian orchestras, and slowly discovered that he was appearing more and more frequently on radio programs. Along with all this, he continued to study with classic masters. In 1931, he formed his own orchestra, and shortly thereafter became staff arranger and conductor for the CBC. In 1940, he came to the United States as conductor of The Contented Hour, and in 1947 added The Pause That Refreshes On The Air to his distinguished musical contributions, joining Columbia Records in 1950. His home is now on Long Island, and when he is not busy in recording and radio studios, he devotes considerable time to photography, golf, model trains and fishing.