The Music Of Brazil! 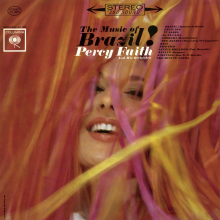 Brazil is many things—most of them spectacular. It is large enough to hold continental United States, with room for another Texas. It possesses the world’s largest river, the Amazon. It has two great waterfalls higher than Niagra. To many widely traveled tourists, Rio de Janeiro, until 1960 Brazil’s capital for nearly two hundred years, is “the world’s most beautiful city.” And there is Brazil’s spectacular music—rhythmic, brilliant, torrid!

As in his previous collections of south of the border music, notably Mucho Gusto!, Jealousy, Malaguena and Viva!, Percy Faith has polished these numbers to a dazzling sheen, giving them his famous, inimitable “Percy Faith” —sumptuous arrangements, brilliantly played.

In his newest album, The Music of Brazil, this is particularly evident, for the excitingly percussive rhythms of the selections are as infectious as their melodies. The vivid exhilaration of Rio’s famous carnival time flashes out of each of these Faith selections to present a musical fiesta. From the torrid Brazil through the kaleidoscopic shadings of Ba-Tu-Ca-Da, from the sultry Baia to the catchy Minute Samba, Percy’s collection of Brazilian rhythms offers an invigorating glimpse of one of the most exciting countries in the world!