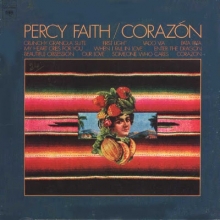 The preparation and production of this latest album by Percy Faith has followed a pattern perfected by Percy over twenty-five years, a way of making music which time and again has resulted in chart hits and treasured collections of unexpected variety. The pattern begins with the search for songs, a search which includes all that is new and all that is memorable in popular music, which covers the musical language of three or four continents, which concludes with more than enough material for three orchestras. Then the final choices are made by the only man who will hear the album during the month of writing, but it is his satisfaction, his excitement over what he hears on each of those silent mornings that we hear now.

If you now Percy—and you know him by his music—you know now why he is excited all over again. Here is his pattern of recording: the insistent Latin excitement of Delicado, the surprising originality of Swedish Rhapsody, the string beauty of Theme from “A Summer Place,” the wild power of Malaguena. Here too, is the best of his own composition, the pioneering orchestral sound, and, as always, music from faraway places, music by young writers, music by jazzmen, music for love.

So, in the order of the final program, Percy plays Carle King’s Corazón, a brief and memorable melody ripe for a rhythmic fling. The orchestra here includes three guitars, three girls in Spanish, and three keyboards, one of which is Faith at the piano.

Beautiful Obsession was an instrumental hit a dozen years ago. Written by Ernie Freeman and Joe Saraceno, it is the sort of melody Percy has found many times before to set against his way. It’s a melody suited to dialogue for strings and flutes.

The opportunity for full power and for a first crescendo comes with Lalo Schifrin’s theme for the motion picture “Enter The Dragon.” Solos are by Clark Gassman on electric piano, Pete Christlieb on tenor saxophone, and Bill Mays on organ.

Alex Harvey’s ballad hit of three years ago, Someone Who Cares, rediscovered by Faith and his producer, takes the sound back to the strings, where, while they were searching, they also chose Percy’s own ballad, Our Love.

The side ends with a song from Italy’s San Remo Festival, Vado Via. For Percy it is an echo of his first album hits of continental music.

Back to Hollywood’s Greek Theatre and Neil Diamond’s Crunchy Granola Suite, arranged now for brass, reeds and voices. Part of Percy’s continuing success has always been his recognition of the best from young writers.

Faith wrote My Heart Cries For You in 1951 with Carl Sigmund and gave it to a young singer named Guy Mitchell. It became Mitchell’s first hit and has since been recorded a couple of hundred times by everybody except Percy. Now it is his, but to establish new rights to his old song he has changed it from a waltz to a four-beat form.

Pata Pata, the unexpected, is part of the expected in a Faith album. The song comes from South Africa, but then, we’ve become accustomed to this Toronto-born conductor foraging south of the equator.

Victor Young wrote When I Fall In Love for a Howard Hughes film called “One Minute to Zero.” That was twenty years ago, but the song, unlike the picture, lives on.

And, finally, to jazz. Freddie Hubbard’s First Light is Percy’s choice because he likes the first, fresh moment when only the grass is talking, and because he saw an opportunity to give his large orchestra its head. Bill Mays plays the electric piano solo.

This, then, is a Percy Faith album in the fullest dimensions. It is his kind of album because it uses all of his talents, because it includes all that for him is musical. He was excited throughout its production. Now he is proud. You know that. You can hear it.