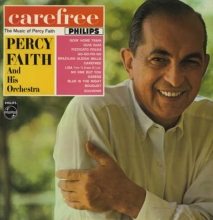 The achievements of Percy Faith as arranger and conductor are so famous that they sometimes overshadow his equally brilliant gifts as a composer. This dazzling collection should remedy that situation, since it contains twelve of Percy’s compositions, displaying the variety of his interests and the lilt of his melodic inspiration.

Although Percy has included some of his compositions in other collections, this is the first album to be devoted entirely to his own music. What he has done for other composers (Richard Rodgers in South Pacific and The Sound of Music, Frederick Loewe in My Fair Lady, George Gerswhin in Porgy and Bess and The Columbia Album of George Gershwin and Victor Herbert in The Columbia Album of Victor Herbert) he now does for his own splendid songs.

Solidly grounded in classical music, Percy has also composed for the screen and written many popular songs, including the perennial favorite, My Heart Cries for You. His adaptation of The Song from Moulin Rouge became an international hit that is approaching sales of two million records. His arrangements of popular favorites amount to new creations, with their resourceful instrumentation, the diverting counterpoint, the clarity, the never-ending contrasts. “The line between composing and arranging is a thin one,” he has remarked.

Comments on the individual compositions in this collection were supplied by Robert Turner:

The opening theme of Goin’ Home Train, played by strings and punctuated with exclamatory chords in muted trumpets, expresses the happiness everyone feels on going home. The middle section is full of longing and expectancy. Finally the train pulls in, and there is a tart, final chord: journey’s over, what’s to come?

Quia Quia is in cha-cha style. Brassy, with energetic, short phrases against an insistent clamor in the rhythm section, it is as saucy as its title insinuates.

In the Pizzicato Polka the tone of the plucked strings is sometimes light and airy; sometimes combined humorously with the tones of a harpsichord.

Also lively in tempo and spirit is Go-Go-Po-Go. The melody is built on a distinctive broken-chord figure, which is heard later in variation.

Brazilian Sleigh Bells. Sleigh bells in Brazil? Well, there is snow occasionally in the south of Brazil. Percy has brought sleigh bells and Brazilian rhythms together with intriguing results. The excitement of a Rio street carnival pervades the entire piece, and there are many suggestions of Brazilian folk melody. As for instrumental interest—listen to the elaborate string figurations and the impudent trombone “slides,” and, in the coda, to the rhythmic staccato high in the piano part, supported by percussion.

The title number, Carefree, has a distinctive swinging theme in the solo piano. There are jaunty phrases for woodwinds, a new theme for strings, and a “cool” sax solo. Most interesting perhaps is the rhythmic design—really a complicated cross-rhythm, which emerges with logic and clarity. The basic meter is 3/4 , but it swings as in 4/4.

The tender melody of Lisa, first heard on strings, was written for Percy’s little granddaughter. It is derived from a 10-measure theme in Percy’s incidental music written for a radio version of Paul Gallico’s story, “The Snow Goose.” The mood is wistful throughout, and there is a touching ending in which the English horn, then flute, then violins, bear the musical message.

No One But You has a rich harmonic background and a flowing melodic line. The coda is quiet and rather reluctant, as though the story were too beautiful to end so soon. In the waltz, Caress, the orchestration is clear and light, the pizzicato string accompaniment full of grace. The run for the flutes, at the end, is tender and tantalizing.

Another bit of musical poetry, Blue is the Night, is one of the most interesting from the compositional point of view. The rapturous melody, first played by alto saxophone, contains some unusual melodic skips, and the shifting impressionistic color is due to the use of a modal scale (neither exactly major nor minor). In the background there is an elusive bongo beat.

Bouquet is lush, heady, romantic. Originally composed for the album of the same name and performed by the Percy Faith Strings, it is a fine example of the well-known Faith “sound.”

Souvenir is a piece in continental style, originally composed for Percy’s album “Bon Voyage.” It’s nostalgic melody is heard first in violas and saxophone in the minor, then repeated high in the strings in major. The coda, pizzicato, suggests an Italian folk song refrain, in which there are no words save the characteristic “la la.” The rhythm is the beguine, an equivalent of which can be found in France and Italy.