Adventure In The Sun 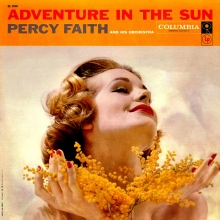 Tracks recorded in New York City between January 1953 and March 1957. All tracks previously released as singles.

Once more the gifted Percy Faith turns his attention to the music of other lands and other climates, in a series of dazzling arrangements as bright and refreshing as the sunny atmosphere they suggest. In many of his other Columbia collections, the arranger-conductor has presented melodies with a high romantic content, and this group is no exception, apart from the fact that their lively tempos and catchy tunes seem to conjure up the daylight hours rather than those of moonlight. Many of them are from Latin latitudes, and the Faith magic with such music is well known indeed.

Here, as a matter of fact, is a collection that is almost a musical travelogue. The first number, Tropical Merengue, might be from either Haiti or the Dominican Republic; Bluebell is almost inevitably Scotland, and Bubbling Over is of Swedish derivation. Then there are such other pleasurable moments as Italiano! and Bahama Lullaby, whose titles speak for themselves, and The Bandit, a dramatic theme from a South American motion picture. These, together with the other toe-tickling tunes in the collection, offer a splendid adventure in the sun, without the necessity for leaving home.

Percy Faith is famous for such musical tours as these; earlier Columbia albums such as “Continental Music” and “Passport to Romance” have drawn upon the beautiful songs of Europe and Latin America to become treasured components of any collection. And, of course, his orchestral settings of Broadway scores have helped to spread their songs even farther abroad. When Percy Faith left his native Canada to come to the United States, he already had great familiarity with fine popular music gained from his studies and from his active career in Canadian broadcasting. On his arrival he almost at once was appointed conductor of one of the longest-running musical programs in radio, The Contented Hour, and shortly thereafter began his distinguished recording career. In the beginning, he concentrated primarily on conducting and arranging music for vocalists, then branched out into purely instrumental work, and has since divided his time between the two. He has introduced, among other innovations, the “Magic Voices,” an unusual handling of choral effects, and has searched endlessly for the little-known and unusual instruments that often add color to his arrangements, beyond the scope of the ordinary orchestra.

In recent years, he has been the distinguished conductor of The Woolworth Hour.

In this adventure in the sun, Percy Faith’s imagination and inventiveness have been brought to play on a group of bright, lively songs, gay in concept and gay in execution. Although he is a master at evoking sentimental, starlit moods, he is also fascinated by the effects possible in light-hearted music as well, and the high spirits and bubbling humor of many of these songs is echoed in his arrangements. This is a collection of engaging music, calculated to bring a smile to the lips and a sparkle to the eyes, as only Percy Faith and his Orchestra can do. For armchair adventures, nothing could be better, and for those who prefer their traveling first hand, here is an admirable musical souvenir.