A Night With Sigmund Romberg 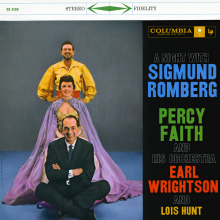 The romantic melodies of Sigmund Romberg go on and on—the newest of those selected for this enchanting program is nearly twenty-five years old—and the reasons are plainly displayed by Percy Faith, Earl Wrightson and Lois Hunt in this collection. Richly romantic, moving, for the most part, to a waltz rhythm, and, in the words of the Old Lady in Candide, easily assimilated, they possess a gentle nostalgia and warm lyricism that are as winning today as when operetta was at its height. Certainly no other composer in America brought the Viennese school of musical theatre to such success, and few others have approached Romberg’s fertility; in one three-year period, before he reached his peak, he composed music for no less than seventeen different productions.

The music presented here by Percy Faith and the soloists comes, with the exception of one film song, from operettas that streamed from his pen following the first World War, and presents glowing panorama of those sentimental productions, many of which are still revived. And even when the operetta itself has passed into the mists, the music remains, lovely as ever.

Percy Faith and Earl Wrightson open this night with Sigmund Romberg with “The Desert Song” from the 1926 production of the same name. A story of romance and intrigue in Morocco, The Desert Song was one of Romberg’s greatest successes, often revived and made into at least three motion picture versions (As a footnote, it is interesting that during its tryout tour the operetta was called My Fair Lady.) Mr. Wrightson continues with “Stout Hearted Men” from The New Moon set in the New Orleans of 1792. The operetta was one of the biggest hits of 1928, and has often been revived. Lois Hunt joins Mr. Wrightson and Percy Faith for the next selection, “Song of Love” from Blossom Time of 1921. This operetta was adapted from a German original, dealing in very careless fashion with the life of Franz Schubert; Sigmund Romberg constructed his score around Schubert melodies, and for “Song of Love” he took the main theme of the “Unfinished” Symphony.

Two melodies from The Desert Song, which starred Vivienne Segal and Robert Halliday, are presented by Mr. Wrightson: the charming ballad “One Alone” and the stirring “Riff Song.” Miss Hunt then joins him for one of the most famous of Romberg duets, “Will You Remember” from Maytime. This operetta was Romberg’s first really major success, and served to establish him as an important composer. It opened in 1917, and starred Peggy Wood and Charles Purcell, who introduced the swirling waltz. Another famous duet is heard next: “Deep in My Heart, Dear” from The Student Prince. The title of the song was used for both Romberg’s biography and the movie version of his life. Miss Hunt then sings “One Kiss” from The New Moon, and the program concludes with “When I Grow Too Old to Dream,” sung by Mr. Wrightson. This typically flowing Romberg waltz comes from one of his film scores, that for The Night Is Young (1935) starring Ramon Navarro and Evelyn Laye.

The artists who present this program are particularly famous for their performances of music of the theatre. Mr. Faith, who arranged and conducted this recording, is represented on records by two volume collections of the music of George Gershwin (C2L 1) and Victor Herbert (C2L 10), and by orchestral settings of music from such outstanding musical productions as My Fair Lady (CL 895), South Pacific (CL 1105), Kismet (CL 895), The Most Happy Fella (CL 905) and Porgy and Bess (CL 1298), among others. In addition, he has recorded many other programs of exceptional range and appeal, and is equally well-known for his outstanding radio programs. Earl Wrightson, one of America’s most distinguished baritones, has appeared widely on radio and television, and is also known for his appearances in Kiss Me, Kate throughout the country. With Lois Hunt, he recently appeared at New York’s Hotel Pierre in a similar program of Romberg melodies. Miss Hunt has appeared with the Metropolitan Opera company, with the Philadelphia Orchestra and the New York Philharmonic, and on many radio programs. In addition, she has been seen in a wide variety of operettas in many cities.