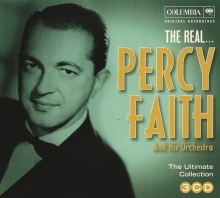 This 46 track is a great value for the casual fan. I paid US $12 which amounts to about 26 cents per song. Unlike many of the “unofficial” European compilations, the sound quality is good. It appears that Sony used the same digital transfers as was used on USA compact disc reissues.

I only wish that the track selection was more balanced. Percy Faith recorded more than 70 original albums during his 25 years at Columbia yet this set includes 10 tracks from Music Of Brazil, 6 from Latin Themes for Young Lovers, and 5 from More Themes From Young Lovers. Many great albums were completely overlooked.