This compilation was originally released by Columbia/Legacy on April 18, 2014 as The Essential Percy Faith but only as a digital download. It was finally made available on CD by Real Gone Music on October 7, 2016. It uses the same cover photo, track sequence and mastering as the mp3 version of the album.

The booklet includes extensive liner notes which will be reproduced sometime in the future. 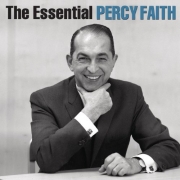 It’s not too much of a stretch to say that Percy Faith invented easy listening music; along with Mantovani, he pioneered the use of string sections to soften and sweeten the brass-dominated sound that dominated popular music during the ‘40s. Faith was also one of Mitch Miller’s main men at Columbia Records, where he provided arrangements for everybody from Doris Day to Tony Bennett to Johnny Mathis, and he composed some of the most memorable soundtrack themes of all time. Now, Real Gone pays tribute to one of the great arrangers and composers in pop music history with a 32-track set spanning 22 years of recordings, including hit singles, tracks drawn from a total of 20 different albums, and a number of his most revered compositions for the screen. Among the highlights: the #1 hits “Delicado,” “Where Is Your Heart (from ‘Moulin Rouge’),” and “The Theme from ‘A Summer Place;’” his soundtrack themes to the films Tammy Tell Me True, The Oscar, and The Love Goddesses, and the TV series The Virginian; and some of his signature adaptations of Latin music like “How Insensitive (Insensataez)” and “Brazil (Aquarela Do Brasil).” Joe Marchese provides the notes, and the package includes photos from the Columbia vaults as well as some of the great cover art that adorned Faith’s album releases. Remastered by Maria Triana at Battery Studios in New York…like the title says, the definitive—and largest ever—Percy Faith collection!

A very well packaged compilation that includes great liner notes, recording dates, photos of Percy Faith and reproductions of album covers. However, it represents another missed opportunity to reissue tracks that still have not made it to CD, such as the re-recordings of Swedish Rhapsody and Show Me.