Disc One: The Early Years

Disc Two: Into The Fifties 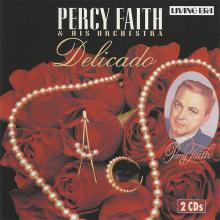 Compiled by Alan Bunting from records in his own collection
Transfers, audio restoration and re-mastering by Alan Bunting
Designed by Studio B, The Creative People

For this compilation, Alan combined the original Song From Moulin Rouge (featuring the Felicia Sanders vocal) with the extended instrumental version that was recorded several months later.

PERCY FAITH is considered to be one of the greatest arranger/conductors ever in the field of light and popular music and many rate him as number one. This is borne out by the fact that more of his work has been re-issued on CD than that of any comparable artist. Until now though, none of his earliest commercial recordings have been available on compact disc. These Decca and RCA Victor labels in the 1940s, plus a selection of those he made after joining Columbia including his best sellers Delicado, Swedish Rhapsody and The Song from “Moulin Rouge.” Thus, this collection finally fills gaps left by the many other CD reissues of Faith’s music, allowing us to hear many fascinating and long forgotten examples from his long and distinguished career.

Born in Toronto, Canada on 7 April 1908, he aspired to be a concert pianist and was soon well on the way to achieving his ambition. Aged twelve, and still at high school, he was playing piano in silent cinemas, using the money he earned to pay for tuition at the Toronto Conservatory of Music where he studied harmonic structure and piano. He made his concert debut in 1923 at a Conservatory concert in Toronto’s Massey Hall playing Liszt’s Hungarian Fantasy.

But fate was about to intervene and change his life forever – in 1926 he badly burned his hands when he rescued his three-year-old sister, who had set fire to her clothes while playing with matches. While recuperating and unable to play the piano, he began to study composition and soon realized that this was to be his destiny. By 1929 he was playing with various hotel and restaurant orchestras, also arranging for many of them, and had become well known in Toronto musical circles. 1931 found him writing arrangements for many different radio programs and in 1933 CBC (The Canadian Broadcasting Commission) signed him as staff arranger/conductor. One of his first shows was Streamline but the one that brought him to the attention of a wider public and, more importantly, the American radio networks was Music By Faith, a weekly show which featured a 30-piece orchestra plus six singers.

Faith enjoyed recounting how these singers joined the show. After covering the cost of the orchestra his budget had about 30 dollars left, not enough to hire additional players, but he discovered that a girl trio who were in the studio at the time would do a show for five dollars each. He recruited three more and then, instead of using them to sing the words, used their voices as instruments – thus Faith’s famous “vocalese” was born, of which several examples may be found on CD Two. Music By Faith was relayed by the Mutual Broadcasting System in America and, as a result, Faith started receiving calls from the likes of Tommy Dorsey, André Kostelanetz and Paul Whiteman suggesting that he should move to America. Faith sensed that what they really wanted was for him to come and arrange for them, not actually be the star, so he resisted these offers. Then, in 1940, CBC decided to cut the budget of Music By Faith – a rather strange decision bearing in mind that it was the most popular radio show in Canada and one of Canada’s few program exports to the USA. Shortly afterwards the show was cancelled and Faith found himself with a family, but without a regular income to support them, so he started thinking about the American offers again.

Once more fate intervened and, while Faith was considering what to do, he was summoned to Chicago to take over The Carnation Contented Hour from Josef Pasternak, who had died from a heart attack at a rehearsal. Faith was booked to cover four shows but, before completing them, was offered the job permanently. As it was one of America’s top musical programs he had little hesitation in accepting, although in an interview some years later he said it was “very old-fashioned” compared with Music By Faith.

Using his considerable talents and experience to re-shape this prestigious show, he was now on his way to becoming America’s top conductor/arranger and in 1941 he moved his family to Chicago. He became a naturized American Citizen in 1945 and, when The Contented Hour transferred to New York in January 1946, the Faiths moved to Great Neck, Long Island. In 1947 he became Musical Director of The Pause That Refreshes and later The Woolworth Hour, which meant a change of radio networks from NBC to CBS. His new employers were, of course, the owners of Columbia Records with whom he would eventually spend the rest of his working life – but it was not for Columbia that he made his first commercial recordings.

Faith’s broadcasting career had given him boundless opportunities to arrange and conduct every kind of music – classical, choral, swing, popular, even jazz, and he was well versed in providing appropriate backings for singers ranging from operatic stars to the latest pop idols. It is therefore rather surprising that someone who was extremely popular in both the USA and Canada, and had been broadcasting to huge audiences in both countries every week since the end of the 30s, didn’t make any commercial records until 1944. Even more surprising is that some of these weren’t actually released until several years later. The precise reasons are unclear – certainly Canada’s record industry had always been overshadowed by America’s, and did little to promote native artists, especially orchestras, but why Faith was ignored for so long by the American Record industry will probably remain a mystery.

Percy’s first commercial recordings were for American Decca and on 20 April 1944 he recorded Amore and Spring Will Be A Little Late this Year in their Chicago studios. He returned in May to record five more titles although one of them, If There Is Someone Lovelier Than You, was not destined to be released as a 78 and record buyers had to await the arrival of the LP format before they could hear this superb arrangement. The next Decca titles were cut in New York in June 1945. As The Contented Hour didn’t move to New York until some six months later one wonders why these sides weren’t recorded in Chicago where he had a ready-made orchestra familiar with the arrangements, most of which had already been tried out on the program. There was now a gap of over a year before he recorded again, this time in the role of accompanist to the popular singing star Hildegarde. Four titles were recorded in October 1946 and, although not strictly speaking “Percy Faith and his Orchestra,” two of them are featured here as a vocal interlude before we move on to the next phase of his recording career.

For some reason Decca did not call further upon Mr. Faith’s services (a decision they probably regretted in later years), and Percy’s next recording venture was an album for the fledgling Majestic label. The term “album” as used here refers to the original concept of an album – a number of 78 rpm discs contained in an album with the discs stored in individual pockets. Majestic was a division of The Majestic Radio & Television Corporation of New York, but it was short-lived and the parent company didn’t last much longer. Faith recorded eight sides for them in 1947 and six were issued as the 78 album Presenting The Exciting Music of Percy Faith. Again two titles never appeared as 78s and there was a long delay before they eventually surfaced. In fact we have had to wait for Majestic to sell its catalog to The Mercury Radio & Television Corporation in 1948, and for Mercury in turn to sell it on to the Wright Record Corporation (part of the now long-defunct Eli Oberstein empire) less than a year later. Mercury had re-issued the six sides as 78s but Wright dubbed them to LP format and released them, together with the two previously unissued tracks, on its Royale label. All of the Majestic titles subsequently turned up on a variety of Oberstein labels, among them Varsity, Rondo-lette, Galaxy and Allegro, under several different overall album titles.

Two years were to elapse before Faith’s next recording session, this time for RCA. In 1949 he recorded twelve tracks at RCA’s Manhattan Center and, yet again, two of them never made it as singles, eventually being include in the LP album Soft Lights And Sweet Music. Although still very busy with his radio commitments, this lack of interest in his music from the record companies must have been quite frustrating for him but, very soon, everything was to change dramatically.

RCA may well have been hoping to make further recordings but Columbia was planning a major assault on the popular market and, in 1950, having appointed Mitch Miller as Head of Artists and Repertoire, they invited Percy to join them as Director of the Popular Division. Some 26 years later Percy was still recording for Columbia and continued to do so until less than a month before he died, on 9 February 1976. Initially Percy had a dual role at Columbia; as well as making recordings in his own right, part of his contract was to develop up-and-coming new singers, and also to “rescue” established ones whose careers were faltering. Tony Bennett, Rosemary Clooney, Johnny Mathis, Guy Mitchell and Doris Day are just a few of those nurtured by Faith and their success owes much to his skills. The majority of his own Columbia recordings at this time featured arrangements of current hit songs, usually with a vocal chorus, as well as some superbly arranged instrumental items. These usually used a somewhat smaller orchestra than the Decca, Majestic and RCA recordings – the lush and exciting orchestral albums which made him world famous came later and are outside the timespan of this collection.

Until television grabbed their full-time attention, children’s records were big business and all the major record companies maintained large catalogs of suitable material. Columbia was no exception and Faith recorded a number of titles specifically for this market. Despite being for relatively unsophisticated listeners, they received the same care and attention as every one of Faith’s arrangements as demonstrated here by one the hardest to find examples, the charming Mosquitoes’ Parade.

A prolific composer (five of his pieces are to be found in this compilation), he always argued strongly in interviews that arranging is very similar to composing and deserves equal status. Unlike the majority of orchestra leaders, Faith always arranged everything himself and it was one of his “arrangement/compositions” that became one of his greatest hits. He adapted Swedish Rhapsody from themes by Hugo Alfven and, backed with his memorable version of The Song From “Moulin Rouge,” it became one of Columbia’s best-selling singles of that era. As well as this vocal version of Moulin Rouge, he also recorded a magnificent extended arrangement and one wonders why he didn’t use it for the Felicia Sanders recording. Perhaps it was considered too long for a single in those days so, in speculative mood, this compilation ends with a composite version of the two, which may well be what the maestro would have preferred to record over 50 years ago!