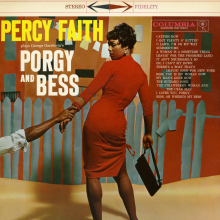 On October 26, 1933, contracts were signed by George Gershwin, Ira Gershwin, Du Bose Heyward and The Theatre Guild for the composition and production of a new American opera, Porgy and Bess. Although hopes must clearly have been high, none of the participants can have had any idea of the eventual significance of the work, nor of the unending beauty of its music. The manuscript was marked finished on August 23, 1935, and the first public performance was heard at the Colonial Theatre in Boston on September 30. New York heard Porgy and Bess on October 10, and received it with a mixture of enthusiasm and dismissal; everyone liked the tunes, but critics felt it was not a true opera and audiences—at least Broadway audiences—tended to shun anything even approaching opera. So shortly thereafter, having run up 124 performances, Porgy and Bess was retired from the stage, leaving only its superb songs as a legacy.

In 1942 the work was revived to considerably more acclaim—both critics and audiences came around, this time, and a long run and extensive tour resulted. The music grew and grew in popularity, both as individual numbers and as a suite arranged for symphony orchestra. Columbia Records then undertook to record the complete work, including several sections cut from stage productions, and met with signal success. And then, on June 9, 1952, Porgy and Bess was revived in Dallas, and a fantastic saga began. The production toured Europe, returned for a year in New York and an American tour, went back to Europe, on to Latin America, played for a week at La Scala in Milan, went behind the Iron Curtain to Leningrad (December 26, 1955) and Moscow, and closed four years later on June 3, 1956 in Amsterdam in the Netherlands. As an example of American theatrical art it provided an unparalleled exhibit for residents of twenty-nine countries. It was pointed out at the time that Porgy and Bess did not so much make a tour as a triumphal procession. And now, to round out the story, Porgy and Bess has been adapted for motion pictures in a Samuel Goldwyn production, directed by Otto Preminger and starring Sidney Poitier, Dorothy Dandridge, Sammy Davis Jr., and Pearl Bailey.

In this program of music from Porgy and Bess, Percy Faith has chosen not only the magnificent highlights but has gone on to include some rarely-heard sections of the Gershwin score. Divorced from its lyrics, the music proves as exciting and vibrant as ever—few melodies anywhere are lovelier than “Summertime” or more touching than “My Man’s Gone Now,” fewer still have the ebullience of “I Got Plenty o’ Nuttin’” or “It Ain’t Neceesarily So.” And included, too, are such comparatively unfamiliar gems as “A Woman Is A Sometime Thing,” “Oh, I Can’t Sit Down” and the street cries of “The Strawberry Woman” and “The Crab Man.” Mr. Faith has presented these selections in the sequence in which they appear in opera, forming a sweeping panorama that moves with engrossing power from the opening sketch of “Catfish Row” to the proud finale, “I’m on My Way.”

The plot of Porgy and Bess concerns a crippled Negro beggar who lives in Catfish Row, a tenement on the waterfront of Charleston, South Carolina. (In the film, the time has been set back from Heyward’s original contemporary setting to that of roughly 1911.) Bess, a vibrant young woman, takes refuge from the law with Porgy, and grows to love him for his gentleness and strength. When Porgy is arrested on suspicion of murder, Bess falls under the evil influences of Sportin’ Life and goes off to New York City with him. On his return, Porgy finds her gone, but with deep faith sets off in his little goat cart to find her. A synopsis so brief can only hint at the richness and depth of the libretto itself, and gives no idea at all of the incomparable splendors of the score. Nevertheless, in Percy Faith’s instrumental settings, the power and excitement of Porgy and Bess are preserved with genuine sympathy, and the music is so ‘right,’ so true, that one is swept along by it. It may be apposite to quote a remark by Virgil Thomson: “When one considers one by one the new works that the world’s greatest opera houses have produced with ballyhoos and hallelujahs in the past forty years and the almost unvarying pattern of their failure, one is inclined to be more than proud of our little Georgie.” And even without Mr. Thomson’s qualification, one is inclined, as these magnificent melodies unfold, to be more than proud.

For this album, I used two orchestral combinations of thirty-seven and forty-two pieces. The performances of the men were so fine that I am inclined to give credit where credit is due, and list the names of those who played important solos, and to praise the orchestra as a whole. I have always thought of this orchestra as an individual, as a soloist rather than as an ensemble.