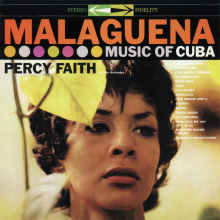 As any visitor knows, there is more to Cuba than rum and sugar, more than gambling and good times, more than historic shrines and beautiful scenery. There is music, fascinating and unusual music, and it is constantly in the air. For this dazzling musical journey to Cuba, Percy Faith has selected a program of characteristic Cuban melodies, some familiar, some relatively unknown, and arranged them in that vivacious fashion for which he has become famous.

Not unnaturally, a large portion of the program has been chosen from the works of Ernesto Lecuona, Cuba’s most brilliant composer. The Malagueña of the title is followed by such lastingly enjoyable numbers as Danza negra, Andalucía (known in an adaptation as “The Breeze and I”), Damisela encantadora, the flashing Siboney, La cumparsa and Para Vigo me voy, also known as “Say Sí Sí.” In addition, another Lecuona is represented, Marguerita Lecuona, who wrote the provocative Tabu. Other familiar names will be those of Gonzalo Roig (Quiéreme mucho, or “Yours”), and Moises Simons, present with Marta and that most famous of all Cuban songs, El manisero or “The Peanut Vendor.”

El manisero was almost the first of the Latin-American melodies to become a success in the United States, and did much to help popularize the then-new rhumba. It has since been followed by scores of lovely and lively tunes, and by other dances as well, many of them originating in Cuba. In fact, when Percy Faith designed this collection of Cuban music, he made sure that each of the five major ballroom dances of Cuban origin were included—the rhumba, the conga, the guaracha, the samba and, of course, the most recent, the cha-cha.

The excitement and color contained in this collection is fulfillment of the primise of the title and artist. For Cuban music is enormously invigorating, and Percy Faith has long been famous for his arranging and conducting of Cuban and Latin American melodies. Among the most popular and rewarding collections of recent years have been his “Viva!” (CL 1075), a fiery exposition of the music of Mexico, and “Delicado” (CL 681), which takes its title from a Faith composition that sold well over a million records. His sympathies are not confined to those regions, of course, as demonstrated by his “Continental Music,” and the splendid omnibus collections of the music of George Gershwin and Victor Herbert, to say nothing of his instrumental albums of Broadway musicals. But Canadian-born Mr. Faith seems to find a special delight in the frisky rhythms and sultry airs, in arranging them for unusual combinations of instruments, and introducing novel—to mainland ears—effects. In Malagueña he has accomplished this agreeable feat with even more than his customary richness, and the profile of Cuba he presents is entirely winning, a colorful and enchanting likeness of a colorful and enchanting island.