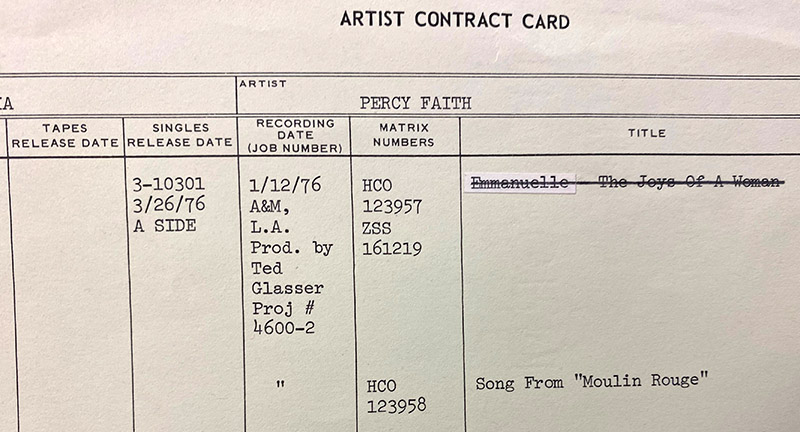 Last month, I had the rare privilege to spend two days at the Sony Music archives in New York City. While the purpose of my visit was to research Ray Conniff, I managed to spend a couple hours looking over the Percy Faith files. They have an incredible amount of information.

Sony has two large volumes devoted to photos of Percy Faith. The volumes are filled with negatives, contact sheets, and slides. Most of the photos are from recording sessions but they also have pictures of Percy at home with his wife, publicity photos, and a few alternate album cover photos. Although I took quite a few pictures with my iPhone, the photos are Sony assets so I cannot reproduce them here. However, my low-resolution pics may be useful as a reference should there be a future project the requires photos from the archives.

In addition to photos, Sony has files! They have many - but not all - of the AFM reports detailing the names of musicians at each session. Unfortunately, it does not appear that they have any AFTRA reports showing names of singers used in Percy's chorus.

My main interest was the "artist contract cards" showing dates, matrix numbers, and other details of every recording. I spent most of my time attempting to capture dates as well as unreleased recordings, such as one shown above: a re-recording (probably a new arrangement) of Song from "Moulin Rouge" (matrix HCO 123958), recorded January 12, 1976 at A&M in Los Angeles. I've found about 10 still-unissued Percy Faith recordings in the files. I'll be updating the database with my new findings.

Many thanks to Jeff James, Director of A&R at Sony/Legacy Recordings, for making our visit possible. Special thanks to Tom Tierney, Director of Archives at Sony Music Entertainment, and Che Williams, Photo Archive Manager.

A few things I learned at the archives: