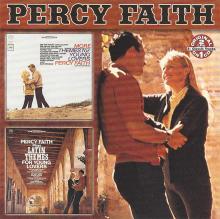 Released by Collectables on February 19, 2002

Can a 52-year-old arranger-conductor cut one of the best-selling instrumentals of the rock era? The answer for Percy Faith was a resounding yes. The man known for Theme From A Summer Place was well into middle-age when he did an easy listening version of the theme from the popular movie. He already had a long string of hit albums and singles, had provided instrumental backing for other artists on their successful recordings and was a noted radio and TV arranger.

Faith’s work in Canada was not unnoticed by broadcasters in the United States, and, in 1940, he left his home country to serve as musical director for NBC. By 1950, he was working for Columbia Records, charting with Cross My Fingers, featuring a vocal by Russ Emery. He went Top 10 that year with All My Love, followed by the holiday themed Christmas In Killarney, done with the Shillelagh Singers.

Besides arranging and producing hits for himself, Faith worked his musical magic as an arranger and producer for a number of artists including Tony Bennett, Johnny Mathis, Doris Day and others. He was also an accomplished writer and his My Heart Cries For You was a hit for Guy Mitchell, Dinah Shore and Vic Damone in the ‘50s.

Although he was busy with other Columbia artists, Faith continued to have his own hits. In the spring of 1951 he went Top 10 with On Top Of Old Smoky, an old folk song that featured a Burl Ives vocal. He also did well with When The Saints Go Marching In and its flip-side, I Want To Be Near You. In the spring of 1952, he topped the charts with Delicado, featuring Stan Freeman on harpsichord.

In the spring of 1953, Faith had a hit with Swedish Rhapsody. After about a month, the B-Side, Song From ‘Moulin Rouge’ (Where Is Your Heart), with a strong vocal by Felicia Sanders, charted and went all the way to No. 1, where it stayed for 10 weeks, earning Faith his first gold record. He followed with another movie theme, Return To Paradise, and closed out the year on the charts with Many Times.

Faith continued to score popular singles with his lush instrumental sound even as rock ‘n roll took over the pop charts. In 1954 he did well with Dream, Dream, Dream and The Bandit. In ’56, he charted with Valley Valparaiso, We All Need Love and With A Little Bit Of Luck. He continued to do well with albums, especially the romantic “Passport To Romance,” issued in 1956, and a collection of songs from “My Fair Lady” that went Top 10 in 1957. His albums were also popular in the ‘60s, as he opened the decade with the Top 10 “Bouquet.” Faith also went Top 10 in 1960 with “Jealousy” and did the same in early ’61 with songs from “Camelot.”

There was some radio play for Theme From “A Summer Place,” but it took almost six months for the record to finally catch on. It charted in the second week of 1960 and headed to the top of the Billboard pop charts, where it remained for nine weeks, selling more than a million copies. It also won a Grammy as record of the year and picked up nominations for best performance by an orchestra and best arrangement.

Theme From “A Summer Place” was followed by the Top 40 Theme For Young Lovers. Meanwhile, Faith’s albums continued to reflect his more adult-oriented sound, as “Mucho Gusto! More Music Of Mexico” sold well in 1961 and “Bouquet Of Love” and “The Music Of Brazil!” were hits in 1962. In 1963, Faith tried something different. That summer, the “Themes For Young Lovers” album was issued, featuring 12 current pop hits that got the warm Faith treatment, including Go Away Little Girl, Our Day Will Come and I Will Follow Him. It became an immediate best-seller, was certified gold and nominated for a Grammy in the best performance by orchestra category.

After “Shangri-La” in 1963 and “Great Folk Themes” in ’64, Faith was back in the summer of that year with “More Themes For Young Lovers.” He would continue into the ‘70s with popular albums that focused on movie themes and pop hits of the day, from “Dr. Zhivago’s” “Somewhere My Love” to Santana’s Black Magic Woman. His last charting album, “Day By Day,” was issued in 1972.

Faith died of cancer on February 9, 1976, not long after overseeing an updated disco version of Theme From “A Summer Place.” He left a rich legacy of music for humself and other artists that covered 50 years and hundreds of records. This collection of two of his best albums for Columbia clearly demonstrates his talent and versatility.