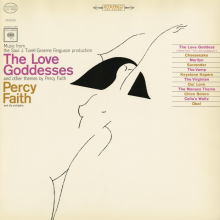 All titles composed by Percy Faith.

"Our Love" was later recorded with lyrics as A World Of Whispers.

“The Love Goddesses” is a movie about the movies. It is a 60-year history of how sex has been treated on the motion picture screen, and how the Love Goddesses have been a reflection of the customs, manners and morals of the times.

Percy Faith has written his themes to match the various and changing moods of these Love Goddesses.

The story begins at the turn of the century with America and her movies still in the shadow of the Victorian era. Lillian Gish expresses this Victorian innocence—a heroine who could not smoke, could not drink, could not even admit she had ever heard about sex. But someone had to do what a good girl could not and the vamp was created.

World War I was to shatter the Victorian age. Overnight women’s role in society changed, their point of view changed. The result was an amazingly different American woman.

The result was Clara Bow, the culmination of the flapper heroine. A sexy little girl, a tease. She was flaming youth—adding zest and high spirits to rebellion and parading a new worldly wisdom that sex somehow meant a good time.

The year now was 1925. The Twenties had started to roar. Inhibitions were cast aside. People were beginning to look for new experiences. The demand arose for something unusual, something exotic (Pola Negri and Lya de Putti). Even in the late Twenties, standards in Europe continued to be different from those in the United States with its basic puritan background. Special versions of American films were made for export to Europe.

One European film made at the end of this period did cause a sensation in the United States. It was “Ecstasy” and starred one of the most beautiful women in the world, Hedy Lamarr.

By 1929 a public caught up in the wondrous, booming Twenties was demanding the unattainable. The result was the creation of an exotic image. A woman not to be loved, but worshipped and even feared. It was this queen-like image that was next to rule the American film—Garbo, Dietrich.

The period of wide-open sex in America though often mistakenly thought to be the Twenties was actually the years from 1930 to 1933; The Blonde Bombshell, Jean Harlow, the time of Busby Berkeley, a genius of design who dreamt up images that would have shocked Sigmund Freud himself.

The same years were full of irreverent comedies starring charming comediennes like Carole Lombard. It was a new era in fashion too—the lingerie era. And just as bathing scenes had been part of the Twenties, so in the early thirties the film makers usually found an excuse to get the heroine down to her step-ins.

But of all the Love Goddesses of comedy, one was to dominate. She was a goddess molded by two opposing forces—one the demand for an ever-increasing frankness about sex, the other a traditional reluctance to face it openly. Mae West is remembered (even by people who never saw her) as the sexiest of the Love Goddesses. In fact it was not so much that she was sexy, but that she was funny about sex. Those who see her will realize why she completely dominated the early Thirties.

The depression re-shaped America’s attitudes. The consequences of a people having to face bread lines and starvation were to be a tightening up of their values. This attitude brought about the production code, an age of innocence and a brand new Love Goddess. It was the period of Shirley Temple, Deanna Durbin, Judy Garland, Andy Hardy and the top Love Goddess of 1937—Snow White. In a country trying to restore its faith in the good life at home the Love Goddess was now the girl next door. The Love Goddess had become a normal, well-shaped, well-rounded girl—a heroine with whom you flirted and whom you married. But because she could not say or do what the Love Goddess of the early Thirties could do, there were sweaters and sarongs and Lana Turner, Betty Grable and Dorothy Lamour.

Then for a second time, a World War crushed an age of innocence. The second cycle was becoming clear. Once again the brakes were off and with gathering momentum into the Sixties moral restrictions were to be loosened. Only one Love Goddess was to span the period from the age of innocence into the Sixties, from “National Velvet” to “Cleopatra”—Elizabeth Taylor, probably the most beautiful Love Goddess of them all. The film, “A Place in the Sun,” shows the beginning of that change.

In the Fifties as in the Twenties the demand again arose for something more exotic, something more unusual—this time for a love image both larger and smaller than life. As the Sixties loomed, history continued to repeat itself. “Room at the Top” marked the beginning of a new period of frankness about sex. Just as Clara Bow had symbolized the rebellion of the Twenties, Brigitte Bardot was the image of a new generation’s rebellion. And to the screen came a stage of nudity such as had not been seen since the late 1930s in Europe. But nudity itself seemed not exciting enough and with Europe in the lead, film makers took to shooting love scenes in the nude—“Les Liaisons Dangereuses,” “The Lovers,” “One Summer of Happiness,” “And God Created Woman.” Combinations of beauty, violence, sex and nudity became the formula of the Sixties. In thirty years the movies had once again come full circle. If anything, the treatment of sex was more overt than ever before.

We could not end even temporarily a history of sex without paying tribute to all of the movie makers who, faced with no other choice but having to use a symbol, have done so memorably. Perhaps the best of all was DeMille’s “Cleopatra.” It starred Claudette Colbert and Henry Wilcoxon. Who else but Cecil B. DeMille would have added to a simple seduction scene a hundred extras, dancing girls, four rows of galley slaves and a drum?

On Side Two of this album, Percy Faith, a gifted composer as well as a superb conductor-arranger, presents six of his original works. Two of them, The Virginian and Celia’s Waltz, Percy wrote for the color television series based on Owen Wister’s classic American novel, “The Virginian.” As background for the CBS Television Network color special, “A Look at Monaco,” composer-conductor Faith captures the festive atmosphere of the charming Mediterranean principality in The Monaco Theme. Long interested in south-of-the-border rhythms, Percy creates sinuous themes that brilliantly conjure up the excitement and magic of Latin America in one of the best-known pieces, Chico Bolero. The unusual effect of plucked strings playing in countermelody against soaring strings makes this selection a special delight. Two more instances of Percy’s persuasive compositional talents are Our Love and concluding the album, Oba!, and exciting bossa nova.