Subways Are For Sleeping 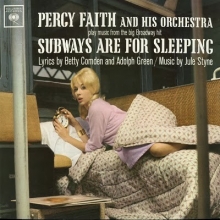 Ever feel that the daily grind of making a living was interfering with living itself? Tired of big business deals, mass culture, bomb shelters? Then come for an exciting subway ride with composer Jule Styne and arranger-conductor Percy Faith. Percy is an expert guide through Jule Styne’s irresistible score for the new Broadway musical hit, Subways Are for Sleeping, all about Manhattan’s zany “underground” population. Book and lyrics are by the famed team of Betty Comden and Adolph Green.

Percy Faith’s arrangement of the opening number begins, appropriately, with drums representing the distant rumble of a subway train, then swells to a roaring orchestral crescendo as we Ride Through The Night to meet some of New York’s most relaxed and picturesque odd-balls. The easy-going strains of I’m Just Taking My Time puts us in a receptive mood to meet these carefree denizens of subways, Grand Central Station benches—and even deserted galleries in the hallowed Metropolitan Museum of Art! We discover with them how amicable the world really can be as we listen to the cheerful, lilting When You Help a Friend Out.

Who Knows What Might Have Been? Introduces us to the show’s hero Tom Bailey, ex-business tycoon turned odd-jobber (walking people’s dogs is a specialty). A chance encounter in the subway introduces him to a runaway bride, Angie McKay. The driving tempo of Getting Married reflects Angie’s impetuous decision to escape matrimony with her boss for whom she represents a combination tax deduction and social hostess.

Percy Faith emphasizes restless, insistent percussion and wistful strings in his arrangement of I Just Can’t Wait. (Charlie Smith, professional meal moocher, can’t wait for the treat of seeing his girl friend fully dressed—her “system” is to wear a wrap-around bath towel in her hotel room and thus for long, rent-overdue periods stave off forcible eviction!)

Percy’s famous trademark, silken strings, are used appropriately for How Can You Describe a Face?, Tom’s eloquent attempt to describe Angie’s beauty. Now I Have Someone is equally persuasive.

Come Once in a Lifetime is a characteristically-buoyant Jule Styne showstopper. Conductor Faith captures brilliantly its infectious exuberance. Wind instruments followed by rhapsodic strings translate into purely orchestral terms Angie’s declaration of love, I Said It and I’m Glad.

Percy Faith concludes his musical tour of the Subways system by answering the happy question, What Is This Feeling in the Air? With a hint of wedding bells.

Percy Faith, composer-arranger-conductor of international fame, has accumulated a long, impressive list of successes and awards. His recording of The Song from “Moulin Rouge” won the “best-selling single of the year” award from Cash Box, the show business magazine. His arrangements of Because of You; Cold, Cold Heart and Rags to Riches helped Tony Bennett win three gold discs for sales topping the million mark. An original song, My Heart Cries for You, also sold over a million discs and was instrumental in launching Guy Mitchell’s career as a major recording artist.

In 1955 Percy Faith received an Academy Award nomination for scoring and conducting the musical sound track for the movie Love Me or Leave Me. An expert arranger for such top vocal stars as Rosemary Clooney, Johnny Mathis and Doris Day, Percy’s album collections range from Latin American rhythms through mood music to immensely popular orchestral settings of Broadway shows, including Kismet, My Fair Lady, Porgy and Bess, The Sound of Music and Camelot.