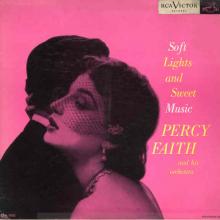 The miracle of modern instrumentation has brought new life to the popular song market. So accustomed are we to hearing “classical” arrangements that we often take them for granted; the effortless beautify and grace of the music belies its struggle for popular acclaim. Actually, it has cost our foremost arrangers over a decade of trial and error to produce the colorful variety which marks today’s popular hits. Not only does this variety mean higher standards of performance, but also a greater range and incentive for songwriting in the future.

Experience, the key to making significant music, is widely reflected in the career of arranger-conductor Percy Faith. One of the leading concert, broadcast and recording figures, he has been keeping popular music alive and interesting ever since, as a youngster, he played piano in a picture theatre. Born in Canada, Percy made his radio debut while studying at the Toronto Conservatory of Music. He was active in orchestra work, and at the age of twenty-three conducted his own string group on the air. At twenty-six, he was signed as a staff arranger and conductor by the Canadian Broadcasting Company and three years later became musical director of C.B.C. through the show “Music by Faith.”

When Percy came to the United States in 1940 to succeed Josef Pasternak on the “Carnation Contented Hour,” popular music was resistant to classicized arranging, except in the films. As conductor of this program for the next seven years, however, he witnessed and helped to create many changes in the scoring of everyday ballads. It was during this era that dance bands adopted violins and also gave birth to “progressive” jazz. Contracted to star as the director of radio’s “Pause That Refreshes” between 1947 and 1950, Percy aided current Folk and International trends by featuring well-known American, European and South American singers as guests on the program.

Because of his activity as a composer, Percy Faith’s arrangements never lose their highly original flair. It is evident in this album of mood settings, as they were selected for melodic evenness and recorded to emphasize the feeling of simple yet pervasive sound. One of the most striking features you will hear is the contrast between novel instrumentation and the familiarity of the music itself. Under the skilled direction of Percy Faith, this imaginative contrast forms the basis for one of the most delightful collections in the modern repertoire.