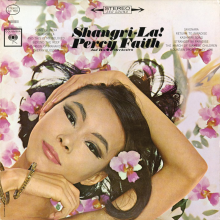 “There’s a magic in the distance, where the sea-line meets the sky,” wrote the poet Alfred Noyes. And in this enchanting collection of music inspired by faraway horizons of the world, Percy Faith applies his matchless touch to a dozen songs that take on a nostalgic glow even for hose who have never journeyed to mysterious India, the fabulous Orient or found peace and contentment on a sun-drenched Pacific isle.

Percy leads his orchestra (sometimes augmented by a wordless vocal chorus) in shimmering evocations of a mythical Himalayan utopia, Shangri-La; a delightfully languid version of Kashmiri Song, suggestive of all the seductive charm of pale hands beside the Shalimar, and songs of Siam (Richard Rodgers’ beloved March of Siamese Children), Persia (Stranger in Paradise, And This Is My Beloved), Japan (Percy’s own composition, Cherry Blossom, and Irving Berlin’s Sayonara), China (Mountain High, Valley Low) and the Pacific region (Beyond the Reef, The Moon of Manakoora, Return to Paradise).

As he has unforgettably demonstrated in his superb series of recordings of Latin American music, popular ballads, favorite standards and Broadway hits, Percy Faith can color a melody as no other conductor-arranger-composer can. The sounds of SHANGRI-LA! Make it abundantly clear that the music of distant realms—real or imagined—has inspired the Maestro’s palette to glow more brilliantly than ever.