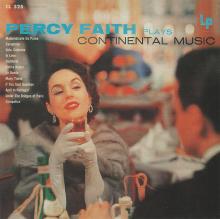 The gentleman to your left, who thinks he knows Continental music because he can hum a few bars of La vie en rose, is in for an agreeable surprise. Because here Percy Faith, fresh from his delectable expositions of American waltzes, carnival rhythms and assorted music from Hollywood, offers a collection of songs from Europe that survey a wide range of emotions, with some of the suavest melodies of the season. Not until very recently has the European song had much success in America; every year or so some English-language adaptation makes a strong bid for fame, but on the whole the tempos and moods of Continental music have been too special for domestic tastes. However, with the success of The Song from Moulin Rouge, April in Portugal and Anna, at substantially the same time, an increased interest in European songs sprang up, and the portfolio presented here by Percy Faith is a fascinating survey of the best of these songs.

The collection opens with two French numbers, Mademoiselle de Paris, a typical French waltz with its light, nostalgic touch, and Symphony, an attractive fox trot that gained considerable success in this country in 1946-7. Vola, Colomba proves to be another fox trot of smooth, easy charm, and In Love (Fiorin Fiorello) explores the Italian mutation of the rhumba with some interesting Faith coloration. Listeners will find Suddenly an enchanting slow waltz, whose melody is as familiar as its title is comparatively unknown. The Petite Bolero is an exceptionally catchy variation on the bolero rhythm, with a strong, sure beat.

The second half of the program with Oscar Straus’ waltz, La Ronde, for the controversial French film of the same name, presenting a charming waltz with carousel overtones and the lightness that should accompany a story of easy amours. Many Times, which follows, is a suave, rich waltz, while If You Said Goodbye (T’ho Volute Bene) from the film “Anna” is an expressive fox trot. Percy Faith’s arrangement of April in Portugal is arresting an unusual, in that it slides over the customary tango setting and reverts to the original conception, with an interesting role assigned to the percussion. Under the Bridges of Paris (Sous les ponts de Paris) brings back the ever delightful French waltz, and the program concludes with a brilliant Spanish-type selction, Sympatico (Chi Lo Sa Perche!) in the vein of current Italian composers.

The arrangements of the songs presented here are in the Faith tradition, rich and resonant, but entirely free of the distortion of the melody that often accompanies concert arrangements of popular numbers. The Faith touch can be velvety, as in the aforementioned Moulin Rouge, or full of abandon, as in his best-selling Delicado, but no matter which mood the song brings forth, a mastery of the material is always evident. These relatively little-known songs which comprise “Continental Music” offer a superb show-case for the Faith style, and at the same time a fine show-case for Continental composers. The grace and sophistication, the cheerful zest, the sweet nostalgia of these songs show that for years Americans have been overlooking a rich and inexhaustible source of melodic refreshment. In presenting them here, Percy Faith not only offers a program of exceptionally pleasant listening, but brings some new notes to the popular musical scene in songs that are destined for wide popularity.