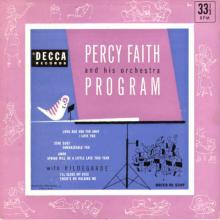 Although this collection was not released until 1951, it consolidated many of Percy Faith's Decca recordings from 1944 and 1946 on a single album.

Canadian-born, but today a citizen of the United States–more exactly a resident of Great Neck, Long Island–Percy Faith had his first professional job at the age of 11, when he played a hearts-and-flowers piano accompaniment to silent movies in a Toronto theatre. He was too small to reach comfortably from bench to keys, so they built him up by seating him on a thick stack of sheet music.

At 15, having attended the Toronto Conservatory of Music, he made his debut on the stage of Massey Hall, along with other star pupils. The critics seemed to like his playing of Liszt’s “Hungarian Fantasy” so, he says, “I thought I might try professional piano–outside of a movie theatre.” At 18, he was writing musical arrangements for prominent bandleaders, and the following year, he became a member of a small concert group. He left this group after a year or two to do radio work.

Faith’s musical talents soon began to develop beyond the limitations of merely playing an instrument; he found himself becoming more and more interested in composing, arranging, and conducting. His work in these three capacities was so outstanding that, in 1933, he became staff conductor, arranger, and pianist with the Canadian Broadcasting Corporation. He remained with CBC for seven years, during which time he wrote and arranged the music for important dramatic programs , and conducted such popular musical shows as “Music by Faith,” “Strings in Swingtime,” “Bands Across the Sea,” and the Empire broadcasts when the King and Queen visited Canada.

Faith came to the United States in 1940 to appear as guest conductor on NBC’s “Carnation Contented Hour,” following the death of Josef Pasternack. In September of that year, he was invited to accept the position of permanent conductor. Percy accepted, and he continues to guide the distinguished orchestra, all of whose programs Faith does himself.

An experienced recording artist, Percy has made several sides with Hildegarde, and she has made guest appearances on his air show. His arrangements are intricate and exuberant, spiced with provocative native touches; the interpretations are full-bodied and imaginative.

The story of how Hildegarde grew from “the shy dear that made Milwaukee famous” to the glamourous young lady who has given command performances before royalty, is a fairy tale come true that needs little retelling here. No secret has been made of her humble beginnings as a pianist in a tiny mid-western movie house. And it never detracted from the eminence of her present position as society’s slickest singer of songs–the one woman capable of holding the super-sophisticates spellbound.

Wherever she appears–and she’s appeared just about everywhere–she’s billed as “The Incomparable Hildegarde.” It’s quite a billing to live up to. A lesser personality might well cringe under the caustic comment so extravagant a descriptive word as “incomparable” could occasion. But Hildy, as she’s affectionately known, thrives on the dangerous adjective–for the simple reason that she is incomparable. There has been no woman in the entertainment world with whom she can be compared. Her brand of showmanship is actually unique. It is so bland, so ingenuous, so apparently naïve, that it is deceptive. You sit looking at and listening to her, wondering what it is she’s got that gets you, and before you’ve finished wondering, Hildy’s got you . . . but good.

A newspaper columnist can’t afford to go all-out in praise of a star too often. He must spend his special words like dollars, must save his bouquets for Saturday Night people. The following quote speaks in terms reserved only for a few of the “chosen.” Everett Johannes, in his column “Hob Nobbing,” said of Hildegarde: “But after the laughs and the repartee, and the lively songs, it is in the quiet and darkened room that she reaches her height. A love song isn’t just a love song to her–it’s a story, and she tells it that way. She goes to the piano and the lights trickle away, all but one soft one, and suddenly her voice grows sad and lost and wistful, and she seems alone, even in the great room, and the words are a soliloquy and the love they tell about might as well be your own, for the songs gets deep down in you. The sad and lost and wistful voice is all over the room, and you are seeing and hearing theatre at its best.”