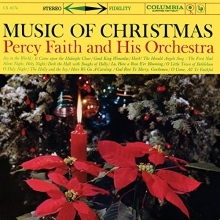 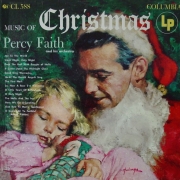 This is a stereo re-recording of the arrangements from Percy Faith's 1954 monaural Music Of Christmas Lp (Columbia CL 588). In its original edition with this well-known cover, this collection sold more than 250,000 copies.

The same liner notes are used on both the original recording and this stereo re-recording.

The music of Christmas is a thing unto itself: so lovely, so inextricably woven with the season it celebrates, that it is impossible to assess. This collection of Christmas music, presented by Percy Faith and his orchestra, is not only a survey of some of the finest melodies, it is also one of the few programs of Christmas music that does not offer the words. So familiar are they, that they come to mind as the notes are played. In each of these presentations, Percy Faith has attempted not only to convey the surging power of the songs, but to conjure up the time and atmosphere that produced them.

Joy to the World
The music for this hymn was arranged by Lowell Mason in 1830, from Handel’s Antioch from the Messiah. One of the most exultant of Christmas hymns, it is a favorite everywhere. The words of the song were written by Isaac Watts in 1719, and were not intended to pertain to any particular part of the church calendar. They were originally included in a book called the “Psalms of David,” and were later set to a relatively plain tune. But with the Handel melody, later added, it became one of the greatest songs of Christmas.

Silent Night, Holy Night
One of the gentlest and loveliest of carols, beloved in both the English and German versions, Silent Night, Holy Night is one of those rarities, a genuine inspiration. One Christmas Eve Franz Grüber, a church organist, and Joseph Möhr, the chirch vicar, wrote the song in only a few hours. The church organ was in disrepair, and special music was needed for the Christmas services. Möhr, therefore, wrote the verses, and Grüber set them to music; the carol was first heard as a three-part arrangement accompanied by a guitar. The happy church was that of St. Nicholas, in Oberndorf, Bavaria, and the year was 1818, and the carol is one of the world’s treasures.

Deck the Hall with Boughs of Holly
The origins of this carol have been lost in time; all that is known is that it is based on an old Welsh air. It celebrates the customs of Yule, a winter festival that pre-dates Christianity in England, and was in fact incorporated into Christmas festivities later. A secular carol, it does not deal with the religious significance of the season, but explains customs that have continued into the present.

It Came Upon the Midnight Clear
The words, by Reverend Edmund Hamilton Sears, were published in 1850, in the “Christian Register.” After its publication, Dr. Sears sent the poem to a friend, asking that he set it to music, and this tune is still occasionally heard. The melody most favored, however, was composed in 1851 by Richard Willis, a Boston composer, who read the poem in a reprinting, and hastened to write his own music for it. One of the few widely-sung carols of American origin, it is loved the world over.

Good King Wenceslas
Another carol that has little direct relation to the religious aspects of Christmas, this is nevertheless one of the most famous and popular songs of its type. The story it tells is that of an incident in the life of King Wenceslas who was ruler of Bohemia in the tenth century. The words are credited to Dr. John Mason Neale, and the music has been adapted from a Swedish Lutheran Hymnal, Piae Cantiones, dating back to 1582.

Hark! The Herald Angels Sing
This spirited work began its history in 1739, when Charles Wesley, brother of the founder of the Methodist Church, wrote the ringing words. One hundred and one years later, in Leipzig, Felix Mendelssohn presented his cantata Festgesang, in which this melody was heard. And in after fifteen years, the words and music were joined by Dr. W. H. Cummings, organist of Waltham Abbey in England. Presented for the first time thus on Christmas day, it became immediately popular and replaced the original setting that had been made for Wesley’s poem.

The First Noël
Whether in the French noël, or the English nowell, this is one of the simplest and most charming of carols. It is genuinely a folksong, and its origins are obscure, although most scholars believe it began in France sometime near 1500. It was familiar in Europe during the seventh century, but did not appear in print until 1833.

Lo, How a Rose E’er Blooming
Like The First Noël, the origins of this song are lost in history, although it is certainly of German origin. It was first published in 1600, and nine years later was harmonized by Michael Praetorius. It has been pointed out that the meaning of the carol arises from a passage in Isaiah 11, 1: And there shall come forth a rod out of the stem of Jesse and a Branch shall grow out of his roots.

O Little Town of Bethlehem
Another American carol, the poem was written by a young rector named Phillips Brooks, out of his experiences in the Holy Land one Christmas season. He wrote the words for the children of his Sunday School, who loved it so much that they prevailed upon Lewis Redner, organist of the school, to set it to music. The story is told that Redner promised to deliver the music within a week, but that on Saturday night he had still not written it. Suddenly awakening during the night, he felt rather than heard the melody, and wrote it down at once, presenting the song the next morning to the Sunday School. The year was 1868, and the church was that of the Holy Trinity, in Philadelphia.

O Holy Night
One of the most beautiful of carols, this is also known as the Cantique de Noël, and was written by Adolphe Adam, the celebrated French composer who is remembered today chiefly for his ballet Giselle and for this carol.

The Holly and the Ivy
Many old English carols are primarily concerned with nature and its symbolism, and it must be admitted that some of the finest of them have their origins in pagan rites. The mixture of Christianity with ancient memories is especially noticeable in this charming carol, which was first published in 1861, although the melody goes back into old French music of the earliest centuries. In many such carols, the holly represents young men, and the ivy young women.

Here We Go A-Caroling
Sometimes called Here We Come A-Wassailing, this is a very old English song sung when groups of Yule revelers went about offering drinks from the Wassail bowl in exchange for gifts. In present-day practice, carols are offered instead of the Wassail bowl, but the practice is still one of the most hallowed of Christmas traditions.

God Rest Ye Merry, Gentlemen
This fine old English carol is marked “gioioso” in its score, and thus signals its evocative celebration of Christmas festivities. The words are attributed to anonymous poets of about 1600, and there are two melodies, although the tune known as the “usual” version is most familiar and popular. Many times the true meaning of the carol is altered somewhat because of a tendency to misplace the comma in the opening line, making a reference to “merry gentlemen,” which, however apposite, is wrong.

O Come, All Ye Faithful (Adeste Fideles)
The first known manuscript of this great melody dates from 1751, although the song is probably much older. The translation in general use in English-speaking countries was made in 1852. Sometimes known as the “Portuguese Hymn,” it has nothing to do with Portugal itself, but is believed to have earned this association from the Portuguese Chapel in London. Whatever its origins, it remains perhaps the greatest of Christmas hymns, truly joyful and triumphant, and one of the most popular ever written.