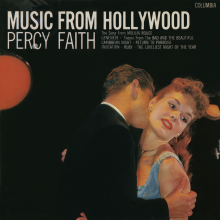 All tracks recorded between 1950 and 1953 and previously released. This Lp is an extended version of the previously issued 10" inch Lp with the same title.

Ever since the days of sound, music on the screen has occupied an important, if sometimes overlooked position. From the early times when the soundtrack overwhelmed the audience to the present, when the music has become an integral part of screen entertainment, musicians of all kinds have composed scores for the movies. Sometimes the musicians were men of the stature of Aaron Copland, Virgil Thomson and similar composers, at other times they were simply songwriters hired to string together some borrowings from classical composers. It is only lately that the screen has developed its own group of musicians, men who have studied the art of the film as well as the art of music, and who have brought new concepts into their writing for movies. These men have written dramatic and exciting scores, and at the same time have not neglected the melodic themes that spill over into popular music.
Many scores for the movies these days forge far into the advanced guard of music, without the public ever quite knowing it. The uses of dissonance and thoroughly modern concepts in film music is far greater than is generally recognized, but these ideas go to point up dramatic concepts rather than demonstrate a musical philosophy. Along with these techniques, however, Hollywood composers have not abandoned the memorable themes that have consistently spread through their work. Not too long ago almost every dramatic film had a theme song that wound its way through the reels, changing in its mood and orchestration as the story progressed. Many of these themes gained popularity in their own right, and it is today’s counterpart of those themes that Percy Faith presents so winningly in this collection.

On of the most charming melodies from recent movies has been The Song from Moulin Rouge, a remarkably lovely French waltz used to introduce Jane Avril in the picture. This song was not only the first from a film score to attain wide popularity in recent years, it was one of the few waltz ballads to become a popular success in many months. The score for the film was written by Georges Auric, one of France’s most gifted composers, and a member of the celebrated Les Six, composed of six famous French composers. M. Auric, a pupil of Vincent D’ndy, has written many ballets and a large number of works for piano and for orchestra, as well as an opera-comique. His music is heard frequently in English and French films, and his score for “Moulin Rouge” is an excellent example of his sparing use of music in a film, music that makes its point swiftly and immediately and then subsides for the actual drama itself. It was Percy Faith’s recording of The Song from Moulin Rouge that began the song’s climb on the bestseller lists; a new, extended version of the arrangement was prepared for this collection.

Not strictly from Hollywood but nevertheless from one of the most amusing films of recent years is the delightful Genevieve, from the British comedy of the same title. The music, written by William Engvick and Larry Adler, provides not only a charming theme but points up the situations in the film throughout. Music as a commentary has been especially notable in British movies, where it is frequently used to give special significance to story movement. Here, however, Percy Faith presents only the theme, a melody of immediate and lasting appeal.

David Raksin, who wrote the music for “The Bad and the Beautiful,” a theme known as Love Is for the Very Young, is one of Hollywood’s most talented composers as Arnold Schonberg and Harl McDonald, Mr. Raksin began his Hollywood career arranging the score for the first Chaplin sound film, “Modern Times.” Remaining there ever since, he has written many notable scores, for a wide variety of movies, including “The Secret Life of Walter Mitty,” “Forever Amber,” “The Magnificent Yankee,” “Whirlpool,” and “The Next Voice You Hear.” Perhaps his best-known work was the music for “Laura,” which in turn became one of the most popular songs of 1945. In addition to his film work, Mr. Raksin has written music for the ballet, for stage plays, chamber groups and for musical comedies. In the theme presented here, he expertly reflects the polished sophistication of the film, overlaid with a wistful, haunting minor quality. Percy Faith’s arrangement underlines the poignant note in the music in a splendid concert setting.

Next, Percy Faith presents on of his own compositions, written for the movie “Starlift.” Long interested in Latin American rhythms, he has here created a sinuous theme that brilliantly conjures up all the excitement and magic of a Caribbean Night.

From the film “Return to Paradise” comes the theme music by Dimitri Tiomkin, one of Hollywood’s foremost composers. This music is colorful and exotic, as befits the score of a film about the south seas, based on James A. Michener’s book of the same name. Mr. Tiomkin, with a thorough training in classical music in Europe and America, has contributed the scores to a large number of notable movies, including “Duel in the Sun,” “Quo Vadis,” and the more recent “High Noon,” for which he won an Academy Award. His remarkable assimilation of the music of the west is brilliantly demonstrated in the title song of “High Noon,” which threaded its way throughout the film with fine dramatic effect, and in “Return to Paradise” he conjures up a provocative picture of island paradises without ever directly quoting native music; he works here by suggestion toward a more powerful result. And the result is one of the most enchanting themes to come from Hollywood in a long time; rich, vibrant and tuneful. Another lovely sample of theme music is the melody written for “Invitation” by Bronislaw Kaper. One of the busiest of Hollywood composers, Mr. Kaper’s scorings are most frequently heard in M-G-M films, adding much to their dramatic and romantic impact.

Like Mr. Tiomkin, Heinz Roemheld has a solid classical background. After initial training in the United States, he studied with masters in Berlin and made his debut as a pianist with the Berlin Philharmonic. From there he moved to supervision of music for German films, finally coming back to the United States to direct the scoring for such memorable films as “Yankee Doodle Dandy” (an Academy Award work), “Down to Earth” and “Valentino.” His most recent work is the music from “Ruby Gentry,” translated into popular music as Ruby. This theme is deep and warm, with a minor cast that gives it a hint of the blues, altogether in keeping with the setting and motivation of the film. Taken out of its context, the theme retains its quality as an individual idea, and contributes much to the current return to the ballad in popular music. In Percy Faith’s fine setting, Ruby is another shining example of the beautiful themes currently in use in Hollywood.

As a finale, Percy Faith presents The Loveliest Night of the Year from “The Great Caruso,” an especially interesting example of the use made of classic themes. The basic material here is an old Viennese waltz called Over the Waves, by Waldteufel, adapted by Irving Aaronson with lyrics by Paul Francis Webster, and the resulting re-creation enjoyed a spectacular success not only as a theme melody, but as an independent popular song. The music presented here by Percy Faith not only gives a cross-section of Hollywood’s striking use of music, but provides rewarding listening for anyone interested in lovely themes in brilliant orchestrations. This is music from Hollywood, arranged and played for your pleasure by Percy Faith and his Orchestra in a stimulating and provocative collection.