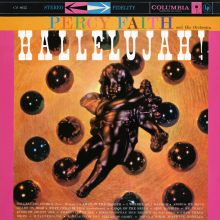 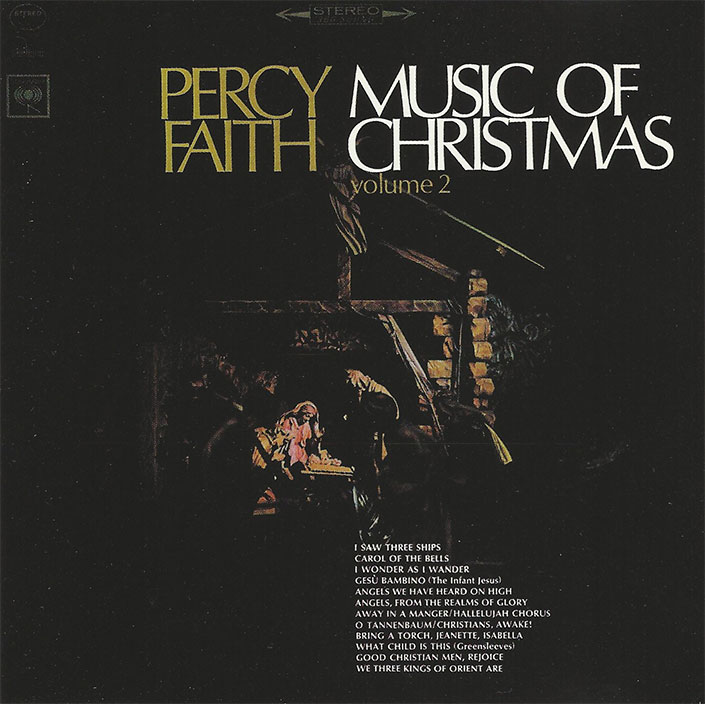 In 1965, this album was repackaged as Music Of Christmas, Vol. 2 with a new cover and notes.

One of the most-treasured collections of Christmas melodies has been Percy Faith’s “Music of Christmas,” (CL 588), a magnificent orchestral setting of many of the loveliest hymns and carols of that season. As a companion volume, Mr. Faith now presents a second collection, arranged and played with the same joyous reverence and majestic beauty. Here he presents a number of carols that have been sung down the centuries, along with others that are comparatively new, all of them deeply a part of the Christmas celebration. Carolling, in fact, is a is perhaps the most widely kept custom of Christmas, and these splendid orchestrations echo that unique combination of devout worship and merry good fellowship that is one of the enduring aspects of Christmas.

Hallelujah Chorus
This jubilant passage from Handel’s Messiah represents some of the greatest pages in music. Composed in 1741 by George Frederick Handel, a German who made England his second home, Messiah was first performed in Dublin in April of the following year and shortly thereafter in London. According to legend, King George II was so moved by the fervor of the Hallelujah Chorus at the first performance that he rose to his feet, thus forcing the rest of the audience to arise, a custom that has carried down to this day.

Away in a Manger
Widely known as Luther’s Cradle Hymn, this carol is believed by many to have been written by Martin Luther for his children. There are many different musical settings for the words, of which the one played here by Mr. Faith is the most popular and—like the melodies of so many carols—by an anonymous hand. Almost as well known is the version employing Flow Gently, Sweet Afton for its tune.

We Three Kings of Orient Are
This beloved carol was written during the nineteenth century by John Henry Hopkins, Jr., son of the second Bishop of Vermont. In its portrait of the Magi it employs ancient musical styles with telling effect. Hopkins, himself a clergyman of note, was an accomplished musician and poet, although most of his work, apart from this carol, is now unknown.

Gesu Bambino
This melody is one of the most recent of all those included in the collection, having been composed in 1917 by the famous organist Pietro Yon. Its lovely simplicity placed it at once among the lasting carols, and it has been increasing in popularity ever since its publication.

Angels We Have Heard on High
Like those of so many other beloved carols, the origin of this work is obscure even to musicologists. Its French origin is betrayed by another title, Les Anges dans nos campagnes, and most authorities feel that it dates from some time about the eighteenth century.

Bring a Torch, Jeanette Isabella
Also French, and also traditional, this carol appears to have originated in Provence some three hundred years ago. A translation, by Edward C. Nunn, was made during the last century, suggesting the carrying of torches to the cradle of the Infant Jesus, a custom popular during medieval times.

Good Christian Men, Rejoice
This stirring melody has been traced back as far as the fourteenth century, and has since been edited by many composers, among them Sir John Stainer. In character it has much of the quality of the old English carols.

Carol of the Bells
Another carol of surprisingly recent origin is this joyous selection, published in the United States in 1936. The melody itself mirrors the lively ringing of the bells of Christmas. It is a Ukrainian carol, composed by M. Leontovich.

I Wonder as I Wander
One of the most beautiful of all Christmas songs is this touchingly simple folksong from America. Discovered by John Jacob Niles in North Carolina, it has now taken its place a as a classic song of Christmas and appears frequently in concert programs as well. Like so many other folksongs, it echoes in its music the England of early times.

I Saw Three Ships
This merry tune comes from England, where it has been known for more than five hundred years. Its traditional choruses describe the sailing of three ships, bearing Mary and the Christ Child, to Bethlehem on Christmas Day, in the morning. “And all the bells on earth did ring.”

What Child Is This
William Chatterton Dix wrote the lyrics that transposed the melody Greensleeves into a charming carol sometime during the last century. Before that, the tune, dating from the sixteenth century, was among the best known and loved in all folk literature, and even today enjoys a renewed popularity, both in its original form and in its Christmas guise.

Angels, from the Realm of Glory
As the preceding carol reflects the tenderness of the Christmas story, so this one displays the joy and cheer of the season. The melody was composed by Henry Thomas Smart during that fruitful period of the Christmas carol, the nineteen century, to words written several years earlier by James Montgomery.

O Tannenbaum
An early and enduring symbol of the Christmas season is the fir tree celebrated in this ancient German carol. Again, neither the author nor composer is known, and the melody itself has been used for many varying purposes.

Christians, Awake!
As in the case of O Little Town of Bethlehem, the words of this carol were written as a Christmas present, in 1749. John Byrom was the author, and the next year his friend John Wainwright composed the music, arriving at the Byrom household with carolers to present his splendid gift.