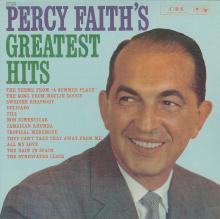 Included in the "original" discography because of Moulin Rouge (w/vocal) and Till.

Percy Faith is one of America’s popular and distinguished musicians. His newest hit, The Theme from “A Summer Place,” has already sold well over a million records, joining Delicado and The Song from Moulin Rouge in that select circle. He is known as a composer—it was he who adapted The Song from Moulin Rouge from the original score, and provided Guy Mitchell with My Heart Cries for You—and arranger and conductor of singular talents. His collections range from sparkling Latin American concoctions through sumptuous mood music to immensely popular instrumental settings of scores from Broadway shows.

Percy Faith was born in Toronto, Canada, on April 7, 1908. He began his studies early, and applied himself so assiduously that by the time he was eleven, he was earning three dollars a night—plus carfare—as a pianist for silent movies in a Toronto theater. At fifteen, he made his concert debut in Massey Hall, and thereafter continued his piano work, along with a new-found interest arranging for orchestras. In 1933, Percy was appointed staff conductor for the Canadian Broadcasting Corporation, remaining until 1940, when he moved to the United States to become conductor of “The Contented Hour.” That same year, he became a citizen. His career moved forward steadily, and in 1947 he became conductor of “The Pause That Refreshes on the Air.” Other radio programs, and guest appearances with such fine orchestras as the NBC Symphony further enhanced his reputation, and in 1950 he joined Columbia Records.