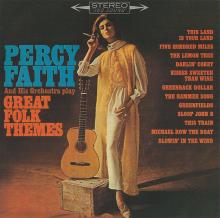 By 7:50 P.M. (Pacific Time) most of the regular Percy Faith musicians had gathered in the recording studio. Violinists were strolling around dropping cadenzas, and the brass men were flushing spit valves and paying off old football bets. At that moment a man walked into the studio carrying a banjo case.

As the banjo player headed for his chair, the orchestra members looked around for an exit. “Must be the wrong studio,” said a cellist, while a gaggle of flutes began to pack up. “I thought this was a Percy Faith date,” the drummer said. “This is the second time this week I’ve goofed.”

Then Percy appeared, stepped to the podium and waved to the banjoist. The time and place for another Faith album were correct. Only the music had been changed.

Faith fans have come to expect the unexpected from this talented man. They know he’s a Canadian who plays Latin music, a string writer who loves jazz and a conductor who may well have accomplished more with an orchestra than anyone else in popular music. They remember his “Music of Christmas” (CL 1381/CS 8176) as the first time an orchestra played the words of the carols: they still play his “My Fair Lady” (CL 895) album to hear the orchestra put on a Broadway hit, and only recently the Faith orchestra in “Themes for Young Lovers” (CL 2023/CS 8823) brought two generations together by showing parents how good their children’s favorite songs really are.

So, it probably won’t surprise you to hear America’s newest favorite, folk music, played by the Faith orchestra of nearly fifty fine musicians, including that banjo player. The songs are all familiar to guitar players and coffee-house gangs. But the colors of a great orchestra give these songs new permanence and new beauty. Percy once again reminds his vast audience of the versatility of his orchestra.