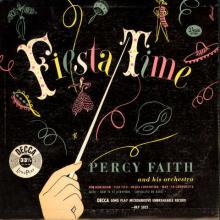 Canadian-born, but today a citizen of the United States–more exactly a resident of Great Neck, Long Island — Percy Faith had his first professional job at the age of 11, when he played a hearts-and-flowers piano accompaniment to silent movies in a Toronto theatre. He was too small to reach comfortably from bench to keys, so they built him up by seating him on a thick stack of sheet music.

At 15, having attended the Toronto Conservatory of Music, he made his debut on the stage of Massey Hall, along with other star pupils. The critics seemed to like his playing of Liszt’s “Hungarian Fantasy” so, he says, “I thought I might try professional piano — outside of a movie theatre.” At 18, he was writing musical arrangements for prominent bandleaders, and the following year, he became a member of a small concert group. He left this group after a year or two to do radio work.

Faith’s musical talents soon began to develop beyond the limitations of merely playing an instrument; he found himself becoming more and more interested in composing, arranging, and conducting. His work in these three capacities was so outstanding that, in 1933, he became staff conductor, arranger, and pianist with the Canadian Broadcasting Corporation. He remained with CBC for seven years, during which time he wrote and arranged the music for important dramatic programs , and conducted such popular musical shows as “Music by Faith,” “Strings in Swingtime,” “Bands Across the Sea,” and the Empire broadcasts when the King and Queen visited Canada.

Faith came to the United States in 1940 to appear as guest conductor on NBC’s “Carnation Contented Hour,” following the death of Josef Pasternack. In September of that year, he was invited to accept the position of permanent conductor. Percy accepted, and he continues to guide the distinguished orchestra, all of whose programs Faith does himself.

Two of Percy Faith’s more recent originals are “Aphrodite” and “Snow Goose.” The latter composition was written as background music for Ingrid Bergman’s radio dramatization of Paul Gallico’s famous story and added greatly to the effectiveness of the narrative.

An experienced recording artist, Percy has made several sides with Hildegarde, and she has made guest appearances on his air show. These Latin0-American selections bear the inimitable Faith stamp. The arrangements are intricate and exuberant, spiced with provocative native touches; the interpretations are full-bodied and imaginative. They all bespeak the versatility of the conductor-composer-arranger, who says: “There is very little music I don’t enjoy playing; but’s I’ve always had a special yen for the samba, tango and rumba rhythms of our neighbors south of the border. I hope you like them as much as I liked making them.”