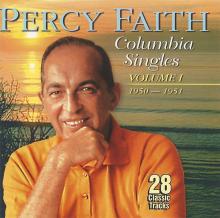 Released by Collectables on October 12, 2004

In 1950, Percy Faith began his association with Columbia Records, one that would last for close to three decades. Faith was already a well-known conductor in his home country of Canada when he came to NBC in 1940, as musical director, after serving in a similar capacity for the Canadian Broadcasting Corporation.

In both positions, he composed and arranged music for guest vocalists, as well as providing incidental or background music for special programming. Holiday music, folk songs, Broadway standards and novelty tunes — Faith developed his talent to adapt all styles of music and integrate them into a format that was pleasing to listen to, as well as commercially appealing.

Besides his duties arranging and producing Columbia artists like Tony Bennett, Guy Mitchell and Johnny Mathis, as well as assisting Mitch Miller, head of the Artist and Repertoire division, Faith was also a recording artist in his own right.

In the pre-rock years of the early 1950s, popular music was still dominated by the after-effects of the Big Band era. Recordings of the day usually began with an opening instrumental piece by the band, with a guest vocalist making his or her appearance around verse two.

The focus of this CD reissue is the first recordings Percy Faith made under his own name for Columbia, predominantly released as singles, in hopes of breaking into the hit parade. In 1950 and 1951, Faith had not yet developed the sonic signature that would make him the dominant easy listening artist of his day, and the most commercially successful one as well. Muzak had been incorporated, but had still not become entrenched as de rigueur in the modern workplace.

The hand of Mitch Miller is evident in the song selections. Miller steered Rosemary Clooney to Come-On-A-My House and Frank Sinatra to Bim Bam Baby. So it was no surprise that for every standard like They Can’t Take That Away From Me and I Talk To Trees Faith recorded, there are songs like Tzin-Tzun-Tzan and Zing Zing - Zoom Zoom.

Faith did have some commercial success with these singles. I Cross My Fingers, featuring Russ Emery on lead vocal went to Number Twenty in the summer of 1950, Faith’s first appearance on the charts. When The Saints Go Marching In, featuring trombonist Will Bradley, was a Top Thirty record in 1951. Shortly thereafter, I Want To Be Near You with Peter Hanley on lead vocal also went Top Thirty that same year.

Every artist needs a period of growth before he refines his style to its essence. In the early recordings, Faith was using elements like wordless vocals, lush string passages, and Latin rhythms, that he would use in later recordings to a greater effect. Also, sound recording technology would develop so that by the time Percy Faith would have his real breakthrough hit in 1960 with The Theme From “A Summer Place,” his records sounded like no other on the transistor dial.

In much the same way that Elvis Presley defined his genre of music — rockabilly — with his personal sonic imprint, so Percy Faith also did to easy listening. Along with Joe Meek and Phil Spector, two other early popular music pioneers, his recordings were just slightly ahead of his time to be considered both innovative, yet still be immensely popular with the public.

So these recordings, and the singles released on Volume 2 (1952-1958) (COL 7636) are an interesting glimpse into the mind of an artist in transition. These 45s were made to catch the public’s imagination with a particular song. When Percy Faith and Columbia Records discovered that selling the “Percy Faith Sound” was more crucial, then his string of successful albums in the Sixties and Seventies began. That corporate vision would extend to labelmates Andre Kostelanetz and Ray Conniff as well, both master practitioners of the easy listening genre.

These long unavailable songs add to the body of work of one of America’s most successful recording artists. Percy Faith was a product of his times, the optimism of a man-made paradise in the middle of a turbulent world, and an oasis of calm in a metropolitan storm. That is his legacy.