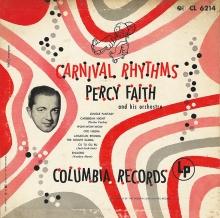 In this collection of rhythms from south of the border, Percy Faith turns his masterful orchestrations to a group of familiar and not-so-familiar numbers to present a program of infectiously delightful melodies, all spiced with the captivating rhythms of the carnival. As in his previous collections, Percy Faith has polished these numbers to a fine sheen, giving them sumptuous arrangements and yet keeping the feeling fresh, light and merry.

All varieties of Latin American tempos are presented, and presented with a flair for their color and excitement that is unique. As Percy Faith has demonstrated in his previous orchestrations of similar music, his talent for the Latin carnival atmosphere is at once sympathetic and brilliant. While this program of Carnival Rhythms progresses from one stirring number to another, the swift interplay of orchestral tones and timbres produces an increasingly provocative effect.

As a staff arranger and conductor for the Canadian Broadcasting System, as the conductor of the Contented Hour for many seasons, and as one of Columbia’s top artists, Percy Faith has again and again produced a kind of orchestral settings that is inimitable. Using a large orchestra, he gives his listeners a remarkable exhibition of instrumental sonorities, cannily presented for the maximum emotional effect. And yet the size of the orchestra never governs the rhythm, which is kept steady and evident. In many settings for concert groups the tempos are varied so frequently that the forward movement of the song is lost; this is never so in a Faith arrangement. It is as if a concert orchestra were playing for a dance, and this adherence to the beat produces the effect of a greater freedom than would a constantly shifting rhythm.

In Carnival Rhythms, this is especially evident, for the rhythms of these numbers are as colorful as their melodies. The vivid exhilaration of carnival time flashes out of each of these Faith presentations to present a sort of short fiesta on record. From the torrid Jungle Fantasy through the kaleidoscopic shadings of Oye Negra, from the catchy Jamaican Rhumba (written by Arthur Benjamin as an encore piece for violist William Primrose) to the sultry Enlloro, this group of tropical rhythms offers a jubilant glimpse of carnival time in Latin America. Under Percy Faith’s baton, the orchestra gives brilliant readings of his arrangements, and the result is a program you will enjoy again and again.

Initially issued as singles, these recordings were compiled for this 10" Lp before being reissued - with additional recordings - on the Lp Delicado 12" Lp in 1955. Percy did not list this Lp in his "complete album list" but since this was the first album release of these recordings, I've included it here as an original album as Alan Bunting did in his discography.