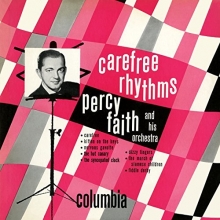 Having already offered his eager listeners “Carnival Rhythms” and “Fascinating Rhythms,” Percy Faith now turns to a group of “Carefree Rhythms” with a program of delectable light compositions. Music of the kind included in this collection has for some reason been, until recently, in no particular flavor in America. The English, with Eric Coates and similar composers, have had the field almost entirely to themselves. Lately, however, with the advent of Leroy Anderson and Percy Faith himself, the popular concert piece has been catching on and attaining considerable popularity. Such Faith personations as Delicado, Jamaican Rhumba and Amorada have ridden high on the hit lists, and program music has won an increasing acceptance.

“Carefree Rhythms” contains just that: rhythms that skim over the musical staff lightly and happily. And under Percy Faith’s direction, the orchestra attains a shimmering gloss that adds a rich sheen to the music. His collection opens with one of his own compositions, the merry Carefree, with Louis Stein at the piano. A classic from the Twenties, Kitten on the Keys by Zez Confrey, introduces two more outstanding popular pianists to the program, Stan Freeman and Bernie Leighton. Mr. Stein returns in another Faith composition, Nervous Gavotte, and a brilliant choral setting of the familiar The Hot Canary brings the group to its intermission.

Beginning again, the popular Syncopated Clock ticks off its lighthearted measures, giving way to another Confrey composition, Dizzy Fingers. In this number a Faith innovation is demonstrated, the Magic Voices. This technique consists in using a female chorus singing wordlessly as another instrument of the orchestra, treated as a unit of sound and color rather than one of verbal expression. The program continues with Richard Rodgers’ The March of Siamese Children from “The King and I,” and comes to a close with an amusing Faith re-creation of the racetrack, Fiddle Derby.

Apart from its pleasances as a group of amusing and tuneful concert pieces, this collection shows the fine talents of Percy Faith as composer and conductor. For many years the musical director of some of radio’s finest programs, he has consistently brought to records a superior musical intelligence. Whether serving as a suave accompanist for some of the country’s top vocalists, or presenting his own arrangements of popular songs, he has unfailingly offered top-flight musical fare. A single hearing of “Carefree Rhythms” is sufficient evidence of his craftsmanship as a conductor and arranger; a single hearing of his compositions offers proof of his creative gifts. All these are in “Carefree Rhythms,” plus the bounce and verve of eight gay and charming popular favorites.