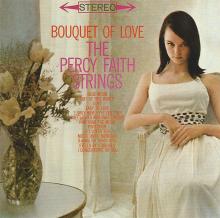 The first Percy Faith album Bouquet (CL 1322) to feature his string section was a triumph. Featuring an enormous string contingent that any major symphony orchestra would be proud to call its own — 16 first violins, 16 second violins, 8 violas and 8 cellos — the album was recorded in Columbia’s New York studio by Harold Chapman, the engineer who has supervised all Percy’s albums. Bouquet of Love is, of course, a sequel to Bouquet. To the sumptuous strings are added a number of instruments that blend into the ensemble perfectly — percussion, harp, piano, and guitar.

Once again, a huge studio has been arranged to accommodate triple banks of strings which carry great melodies and equally memorable countermelodies back and forth across the orchestra. Once again, engineer Harold Chapman was in charge. The repertoire includes some of the finest ballads America has produced. As in the first Bouquet, Percy has included some of his own compositions, this time Duet and Music Until Midnight, along with those of Richard Rodgers, Cole Porter, Harold Arlen, Harry Warren, Irving Berlin, Victor Young and others.

There is one change in Percy’s new orchestral bouquet. Now Percy and “Chappie” and the orchestra are all in Hollywood, where even concertmasters wear sports shirts and cellists drive larger sports cars than violinists. For Percy and for me, this second album by the Percy Faith Strings is most of all a tribute to a wonderful orchestra. The pleasure these musicians took in recording Bouquet of Love is discernible in every measure. The click of their bows on the stands is the only expression of their satisfaction we did not record. We dedicate the album to all the fine musicians listed below.