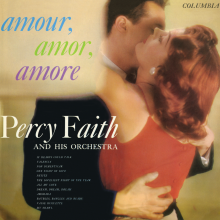 All tracks recorded between 1950 and 1955 and previously released as singles.

Amour, amor, amore—these are three of the most-used words in the world, and three of the most popular. A fourth—love—could be added, except that it is unfortunately non-alliterative. Each of the songs in this collection deals with that treasurable subject more or less directly, and each of them has in its time made contributions to the romantic atmosphere of the day. As played by Percy Faith and his orchestra, they once again conjure up a heady mixture of romance and melody, and offer a perfect occasion for listening or as a background to more sentimental pastimes.

The brilliant arrangements of Percy Faith, although admirably adapted to almost any kind of popular music, shine with particular brightness in the music of other lands. With such melodies he is able to underline their character with imaginative touches of all kinds, pointing up the atmosphere and introducing new elements into the sound qualities of popular songs. Several of the songs in this collection are of American origin, and his touch in them is no less sure, but the exotic sounds he evokes from his orchestra in the others is what gives the collection its special flavor.

His introduction of a harpsichord in Delicado, his use of pyramiding violins in The Song from Moulin Rouge, and his evocative tinkles of ancient bells in Return to Paradise—these are but three of his innovations. In this collection, many others will be heard, in a group of songs dealing with romance in all languages.

Music by Georges Auric opens the program, If Hearts Could Talk from “Abdullah the Great.” As in one of his greatest hits, The Song from Moulin Rouge, Percy Faith indicates a special sympathy for the music of this composer in a lovely arrangement. A clear Spanish influence pervades the next selection, the lively Valencia. One of the greatest hits of the twenties, it offers a splendid showcase for the imaginative ideas of the conductor. Then follows a charming Italian song, Non Dimenticar (Don’t Forget), in which the orchestra gives one of its suavest performances, and One Night of Love, written by Victor Schertzinger for Grace Moore in her movie debut. Apart from its memorable melody, the song also qualifies in this international collection in that the story took place in Italy for the most part.

Petite, a charming tune with a French flavor, introduces the expert Faith orchestral voicings, and The Loveliest Night of the Year from “The Great Caruso” brings with it an unmistakable Viennese touch, having been adapted from the waltz Over the Waves. Another song of French derivation, and one that in its initial release was one of Percy Faith’s biggest hits, is All My Love, original Bolero in France, although quite different from the Ravel composition. Next is heard Dream, Dream, Dream, one of the smoothest Faith arrangements and one that shows he is just as much at home with American melodies as with those of other lands.

Another great Faith success follows, the excitingly Latin Amorada in which he vividly exploits the tonal colorings of his orchestra. Then, moving swiftly eastward to the Bagdad of “Kismet,” he offers Baubles, Bangles and Beads, a beautiful waltz adapted from the music of Borodin and featuring temple bells in its rich arrangement. A combination of Czechoslovakia, France and the United States follows in the Valse Huguette; this amalgam is explained by the fact that the composer, Rudolf Friml, was born in Czechoslovakia, that the musical “The Vagabond King” from which it was selected is set in the Paris of François Villon, and that the operatta was written and first produced in the United States. The collection closes on a final Latin note, in the sumptuous Faith arrangement of My Shawl.

The oldest of eight children, Percy Faith began studying the violin at the age of seven. Shortly thereafter and aunt gave him a fine piano, with which he immediately became fascinated. By the time he was ten, he had progressed to the point where he was able to present a double recital, playing alternate solos on the violin and the piano. However, his real love was the piano, and he concentrated on that instrument. During his high school years, he found after-hours employment in a Toronto movie house, playing music to accompany silent films. Here he learned how to improvise and to ad-lib to fit the mood of various scenes and to stretch out the music when his cue-sheets proved faulty.

Upon graduation from high school, he joined an orchestra which played in and around Toronto. Suddenly, an offer came from Jack Arthur, a symphonic-orchestra conductor known as the “Paul Whiteman of Canada.” Impressed with Percy’s ability, Arthur lent him a small band in the area, intending to place him in his own group after Percy had acquired more experience. However, Percy found work on several radio programs, and continued to study for concert work under such teachers as Frank Wellman of the Toronto Conservatory and Louis Waizman. It was Waizman who recognized the young musician’s talent for interpretative arranging, and convinced him that he should follow that technique.

By 1931, Faith was conducting his own orchestra—a small string group—on the air. He progressed through larger groups and in 1934 the Canadian Broadcasting System hired him as staff arranger and conductor. He was given a program called “Gaiety in Romance” that at once landed a sponsor, and continued with “Streamline” and “Music by Faith.” Early in 1940 he was offered the conductor’s post with the “Carnation Hour” in the United States, which he conducted until 1947, when he starred on “The Pause That Refreshes.” Shortly thereafter, he joined Columbia Records as a member of the Artists and Repertoire staff and as a recording artist in his own right. Since that time his arrangements have been in constant demand, and he has been one of the leaders in the return of the instrumental number to favor.