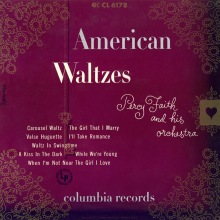 There is a decided tendency, in thinking of waltzes, to associate this lovely form exclusively with the Viennese. And while it is true that Vienna is the virtual birthplace of the waltz, it is unfair to neglect American contributions to the magic of three-quarter time. For this collection, Percy Faith has selected and arranged eight notable American waltzes, to demonstrate that the lilting beat, the inventive flow of melody and swirling atmosphere of the waltz are not Viennese alone.

Percy Faith’s recording work, both as an accompanist and as an artist in his own right, has made him one of this country’s most popular conductors, and his arrangements, rich without losing the essential character and content of the song, are among the most expressive and rewarding experiences in popular music.

For this collection of American waltzes, Percy Faith has chosen eight captivating songs by some of America’s finest composers. The Carousel waltzes, composed by Richard Rogers as an introduction to the successful musical play of the same name, open the group. Percy Faith continues with a beguilingly languorous setting of Irving Berlin’s The Girl That I Marry from “Annie Get Your Gun,” and a dark-hued version of Rudolf Friml’s Valse Huguette from “The Vagabond King.” I’ll Take Romance, by Ben Oakland, is drawn from the score of a film starring the late Grace Moore.

Percy Faith then conducts the capricious Waltz In Swingtime written by Jerome Kern for the film “Swing Time” starring Fred Astaire and Ginger Rogers. Victor Herbert’s A Kiss In The Dark from “Orange Blossoms” is heard in a sumptuous Faith arrangement, with Alec Wilder’s While We’re Young following in a light-hearted setting evocative of the springtime freshness of the melody. The program concludes with a rollicking presentation of the wry When I’m Not Near The Girl I Love, composed by Burton Lane for “Finian’s Rainbow.”

These immensely attractive songs, in equally appealing arrangements, all possess a quality uniquely American. A forthright sentiment flows through them, but a sentiment that avoids sentimentality. Moreover, the three-quarter beat has a lift that derives from this country rather than from Vienna. These factors are emphasized in Percy Faith’s arrangements, which have been designed for listening rather than for dancing. Strictly speaking, all the composers are not American, for Rudolf Friml was born in Prague, and the unique Victor Herbert came here from Ireland. But all the waltzes in this happy collection were composed for Americans and in the American idiom, and, in consequence, present an array of delectable melodies in that most intoxicating of rhythms, the waltz.