A Night With Jerome Kern 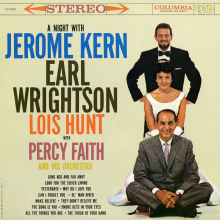 Few composers of popular music have possessed the charm, the almost Schubertian grace of Jerome Kern. Fro his first complete Broadway score, in 1911, until his last, that for the 1945 film Centennial Summer, his scores and popular songs glowed with a special loveliness that was his alone. A composer with a background of solid musical training, he was also influenced, according to Sigmund Spaeth, by the folksongs he learned from a Bohemian nurse, and indeed some of the most popular Kern melodies have as a basis a subdued or refined polka rhythm. In this enchanting program of Kern songs, Earl Wrightson, Lois Hunt and Percy Faith have chosen a dozen of his most beautiful ballads, most of them popular from the day they were first heard, and all of them unusually fine examples of Kern’s melodic gift, as well as the gifts of such brilliant lyricists as Oscar Hammerstein II, Ira Gershwin and Otto Harbach.

Mr. Wrightson opens the program with The Song Is You from “Music in the Air” (1932), and continues with They Didn’t Believe Me, one of Kern’s first real hits, from “The Girl from Utah” (1914). Miss Hunt then joins Mr. Wrightson in the splendid duet from “Show Boat,” Make Believe, a song as lovely today as it was in 1927. Smoke Gets in Your Eyes, from “Roberta” (1933) provides Miss Hunt with an affecting solo, and Mr. Wrightson joins her in All the Things You Are from the 1939 production “Very Warm for May,” which was Kern’s last score for Broadway. “Sally” (1920) provides Mr. Wrightson with the concluding number of the first half, the lilting Look for the Silver Lining.

Mr. Wrightson opens the second part of the program with Long Ago and Far Away from the 1944 film “Cover Girl,” and continues with another movie song, Can I Forget You from “High, Wide and Handsome” (1937). Miss Hunt joins him for another brilliant duet from “Show Boat,” Why Do I Love You, and then she sings the haunting Yesterdays from “Roberta.” Together, Mr. Wrightson and Miss Hunt present yet another lovely song from “Roberta,” The Touch of Your Hand, and he concludes the program with that stirringly dramatic song from “Show Boat,” Old Man River.

This program is presented by the same artists who scored such outstanding success with a similar presentation, “A Night with Sigmund Romberg” (CL 1302, Stereo CS 8108). Mr. Wrightson, one of America’s most distinguished baritones, is widely known for his appearances on television and on radio, and for his many notable theatrical performances, including a long tour in “Kiss Me, Kate.” With Miss Hunt, he has appeared at the Hotel Pierre in New York in programs devoted to outstanding composers. Miss Hunt has appeared with the Metropolitan Opera Company with the New York Philharmonic and The Philadelphia Orchestra, and is also a favorite of radio, television and operetta audiences. Mr. Faith, who conducts this program, is famed for his sympathetic arrangements of music from the theatre, particularly his programs of Gershwin music (C2L 1) and Victor Herbert (C2L 10, Stereo C2S 801), and his recent orchestral setting of “Porgy and Bess” (CL 1298, Stereo CS 8105). Another of his new recordings, “Bouquet” (CL 1322, Stereo CS 8124) offers richly romantic setting of a dozen lovely melodies of recent years.