A Look At Monaco 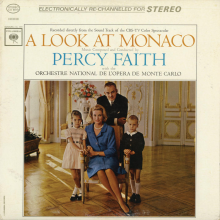 “If Monaco had not existed it would have been necessary for someone to invent it, but it would be hard to re-invent the productions of nature or history or men. For in spite of the recurring convulsions of human societies, the Principality of Monaco, under the loveliest sky in the world, has known how to survive and prosper.”

These are the words of Georges Duhamel, member of the French Academy.

In November of 1962, an American television production company invaded this most lovely of little countries with not only the permission but the cooperation of its Prince and Princess.

The resulting CBS-TV color special, A Look at Monaco, produced by William Frye directed by Douglas Heyes, written by Cynthia Lindsay and photographed by Lionel Lindon, introduced for the first time, informally, Prince Rainier III, Princess Grace and their two children to the public. This full-hour show was telecast by network affiliates from 8 to 9 (EST), on Sunday evening, February 17, 1963.

Personally guided by the Prince and Princess, the public is taken through many of the private rooms in the Palace as well as the official State Chambers. Princess Grace, in in pointing out objects of interest within the confines of the Palace, is able to present, simultaneously, some of the highlights of Monaco’s long and dramatic history. She also takes the audience through the principality itself.

There are many informal as well as formal scenes with the children—with their parents, playing with their friends in the Palace garden and being presented to their subjects.

Prince Rainier’s family, the Grimaldis, have been Monaco’s ruling family since 1215. The Prince and Princess are keenly interested in, and participate in, civic and cultural affairs. Monaco has always been a haven of science and culture and, most particularly, music. The famous Ballet Russe de Monte Carlo, the Orchestre National de L’Opera de Monte-Carlo and Prince Rainier’s Musical Awards are notable examples. The latter, the annual Prince Rainier III of Monaco International Music Composition Prizes, continue Monte Carlo’s tradition of encouraging and aiding new and young composers. This year in April, for the fourth consecutive year, a competition will be held, awarding some $9,000 to composers of unpublished works in the categories of opera, symphony and chamber music. In addition to the monetary prizes awarded, the winners are given the rare opportunity of seeing or hearing their works performed.

Percy Faith conducts the Orchestre National de L’Opera de Monte-Carlo in the original music he composed for the telecast. The orchestra, which will celebrate its 100th anniversary this year, has won high critical acclaim on its European tour and has been honored with several international prizes for its recordings of classical masterpieces. It has long received world-wide attention in connection with the Monte Carlo opera and ballet seasons and, more recently, with the popular Palace Courtyard summer concerts, organized under the patronage of Prince Rainier.

Numerous leading figures of the music world have made guest appearances with the orchestra, including many of the most celebrated virtuosos of piano, violin and cello. Among the pianists have been Artur Rubinstein, Paderewski, José Iturbi, Alfred Cortot and Artur Schnabel; violin soloists have been Zino Francescatti, Yehudi Menuhin, Jacques Thibault and Fritz Kreisler, and cellists Pablo Casals and Maurice Maréchal.

As background for A Look at Monaco, composer-conductor Percy Faith has captured and recorded Monaco’s music. Maestro Faith has composed an original “Monaco Theme” and a score which manages to encompass musically the sound of Monaco—the gentle clip-clop of the horses’ hooves, the whir of the roulette wheel in the Casino, the roar of the Grand Prix, the swish of the boats cutting through the water, the gaiety of the Monégasque folk songs and the rousing strains of the National Anthem. The recording was made in Monaco.