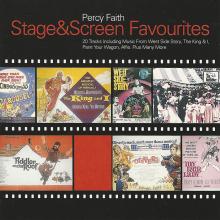 Stereo-era recordings of "Never On Sunday," "Lawrence Of Arabia," "Our Language Of Love," and "Theme From Mahagonny" are in mono.

With the mid-90s Easy Listening revival well and truly under way, it is a very good time to be introducing this new compilation of Columbia recordings by master arranger-conductor Percy Faith.

Melody is the essence of ‘Easy,’ as it’s now trendily referred to, and there is no greater lover and respecter of melody than Canadian-born Faith, here heard enhancing twenty magnificent themes from stage and screen.

It will come as little surprise to anyone that Percy Faith, known worldwide for his sumptuous string sound, started his musical education playing the violin at the age of seven. Courtesy of an aunt, a piano then came into his life and for a while, both instruments shared his affections. Then the keyboard edged ahead.

Aged eleven, precocious Percy was playing piano for the silent movies – a fabulous training ground – at $3 a time, and aged fifteen, he was giving his first major recital at Massey Hall. But a tragic accident around 1926, in which his hands were burned, effectively ruled out a concert career and the young maestro turned to arranging.

For the remainder of the ‘20s, Faith combined theory and practice, balancing study at the Toronto Conservatory with hands-on experience on bandstands and radio. He even formed his own string ensemble, another pointer to his fate.

By the early ‘30s, he was safely ensconced at the Canadian Broadcasting Corporation, presenting “Gaiety In Romance,” then “Streamline” and ultimately “Music By Faith,” which was carried in the USA by MBS. However, budget cuts prompted him to move on and in 1940, he moved to America, immediately replacing Josef Paternak as M.D. for Carnation’s “Contented Hour” on NBC. More radio work followed, as did records for Decca and RCA before, in 1950, aged forty-two, he arrived at Columbia Records, there to remain for twenty-six years, until his death.

“Your Dance Date” was the first of over eighty albums Faith and his orchestra made for the company, a body of work that eventually embraced everything from salutes to great Broadway shows and great American composers via exploration of great Latin rhythms to pop tunes and even, in the mid-70s, disco treatments. Total sales topped the fifty million mark.

Percy Faith died on February 9th, 1976, six weeks after completing work on “Summer Place ’76,” an album led by a contemporary update of his single best-known title.

The top-drawer film and show tunes assembled here were meat and drink to the man and consequently, despite the absence of his hits (readily available elsewhere), this collection in many ways represents quintessential Faith.