Kismet / The Sound Of Music 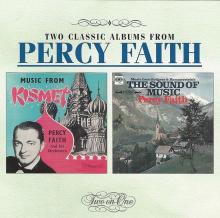 Percy Faith proved on many occasions, during his long and distinguished career as an arranger and conductor, that he was the absolute master when it came to interpreting the songs of the American Musical Theatre. His special skill in arranging and performing the many wonderful melodies that abound within the show music repertoire brought him great popular success in the field of orchestral music, a domain in which he was a leading figure. Faith was passionately dedicated to retaining the original melody in all his orchestral arrangements and his many albums of show music illustrate perfectly how the ‘heart of a song’ should be treated. Much of the ‘true gold’ of quality popular music can be found in Broadway theatre shows and, in the caring hands of Percy Faith, that wonderful legacy has been preserved.

‘Kismet,’ with songs by Robert Wright and George Forrest, based on melodies adapted from the music of Alexander Borodin, opened at New York’s Ziegfeld Theatre on December 3, 1953. Percy Faith and his orchestra recorded the score for what was the first of his albums of show music and the original Columbia Records long player remains on of his finest ever recordings. The maestro used, to telling effect, what he called ‘vocalese,’ namely a chorus of female voices performing as instruments in collaboration with a concert size orchestra. The resulting sound is hauntingly impressive as Percy’s arrangements work their special magic on Borodin’s wonderful melodies. A hallmark of Percy’s orchestral sound was his use of strings and they are appropriately lush and dramatic in this collection.

The brilliance of Columbia’s early fifties monaural sound for ‘Kismet’ gives way to the wide sweep of stereo for the later recording of ‘The Sound Of Music.’ This Rodgers and Hammerstein blockbuster dominated both stage and, subsequently, film during the late 1950s and well into the 1960s. Percy Faith made his recordings in the October of 1959 in the superb studio facilities at Columbia’s 30th Street location in New York City. By the end of the fifties, Faith had gained an enviable reputation for his collection of show music and his orchestral version of ‘The Sound Of Music,’ with its instantly recognizable, catchy tunes, was another great success with record buyers world-wide.

This superb compact disc is a marvelous example of how great show music should sound in an orchestral setting. What you will hear is timeless music beautifully arranged by one of the all-time great musicians and brilliantly performed by a top class concert orchestra. Percy Faith created a magical library of music on record and long may his work continue to be enjoyed in the 21st Century.