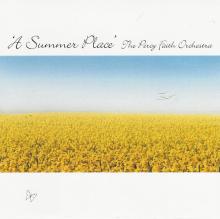 2002 compilation from Pickwick Group Limited. Hallmark is a label owned by Pickwick.

Percy Faith's lush and lovely arrangement of the theme from 'A Summer Place' is here revived in glorious digital recording, making this best-known of all orchestral instrumentals even more memorable. Accompanying it on this collection are Faith's delicious arrangements of such other splendid melodies as "Laura," "Moon River," "The Shadow Of Your Smile" and many more.