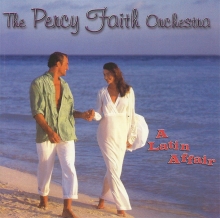 The name of pianist and orchestra-leader Percy Faith is synonymous with quality instrumental music. Born in Canada in 1908, he turned to composing after a domestic accident left him unable to play the piano for five years - and, when his successful Music By Faith radio show crossed the border to the US in 1940, so did he. He initially worked with Columbia Records from 1950 as conductor and arranger for superstars like Doris Day, Rosemary Clooney, Tony Bennett and Johnny Mathis before recording in his own right.

Nominated for an Oscar in 1955 for scoring Love Me Or Leave Me, he registered two US chart-toppers in the pre-rock era with "Song for Moulin Rouge" and "Delicado," the latter revisited here, while "Theme From A Summer Place" repeated the feat in 1960.

Though Percy Faith died in 1976, his music and arrangements live on. These 1990s recordings, made at Capitol Records in Hollywood with Nick Perito conducting, embody the lightness of touch, the unique woodwind voicing and fondness for the Latin beat that were Faith trademarks.