This morning I received news from Bill Halvorsen of Terry Woodson's passing. Among his many accomplishments, Terry was a trombonist in Percy's orchestra, conducted many Percy Faith Orchestra concerts in Japan, and produced albums featuring Percy Faith arrangements. The following obituary was published by Los Angeles Times on Nov. 6, 2022. 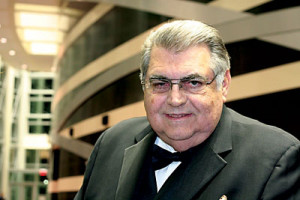 Terry Clark Woodson passed away peacefully at his home in Studio City, California on October 19, 2022. Terry was born on December 19, 1941, in Tulsa, Oklahoma. He attended Tulsa's Central High School and graduated from the University of Tulsa with a Master's degree in Music, before moving to Los Angeles in 1964 to pursue a career in music.
His L.A. career began as bass trombonist for The Don Ellis Orchestra, where he was discovered by world-famous composer, Henry Mancini. Captivated by Terry's talents, Mancini recruited him as his bass trombonist and music librarian. Terry managed Mancini's music library until 2020, well after Mancini's death in 1994. Terry's career blossomed as a musician and as a music librarian/copyist for other legendary artists, such as Frank Sinatra, Frank Sinatra, Jr., Sammy Davis, Jr., Dean Martin, Paul Anka, Liza Minnelli, Maureen McGovern, Patrick Williams, Steve Tyrell, Buddy Childers, Barry Manilow, Nelson Riddle, Percy Faith, Pia Zadora, and countless others. He also often subbed on bass trombone for "The Tonight Show with Johnny Carson."
In addition to numerous Sinatra recordings, Terry worked on albums with Linda Ronstadt & Nelson Riddle, Quincy Jones, Sinatra & Basie, Barry Manilow, Rosemary Clooney, Bette Midler, Diane Schuur, Louie Bellson, Diana Ross, Vince Gill, Andrea Bocelli, James Darren, Monica Mancini, Natalie Cole, Martina McBride, Amy Grant, and countless albums with Patrick Williams.
Famed music producer Phil Ramone considered Terry an invaluable part of the Frank Sinatra "Duets I & II" albums, later stating, "Whatever Terry did, he did it at a 'world-class' level."
As a music copyist, his credits include classics such as The Sonny and Cher Show, The Tony Orlando and Dawn Show, The Smothers Brothers, Newhart, Matlock, Diagnosis Murder, Perry Mason, Jake and the Fatman, The Father Dowling Mysteries and so many others. He also worked on numerous film scores and with Mancini and Leslie Bricusse on the Broadway musical score for "Victor/Victoria."
As a conductor, Terry toured the world several times with Frank Sinatra, Jr., proudly conducting the orchestra at Royal Albert Hall in 2015. He produced Japan tours for The Percy Faith Orchestra after Percy passed in 1976 and conducted the Japanese orchestras in later years after Nick Perito. In major studios of Los Angeles and Hollywood, such as Capitol Records, he was often asked to sit in the recording booth with producers and engineers, keeping a keen eye on the written score and listening for errors and opportunities for improvement. Many times, he conducted the orchestras instead of the composers or arrangers.
Terry was a life member of American Federation of Musicians Local 47, and in 2010, after an extensive music career, he was inducted into the Oklahoma Jazz Hall of Fame.
His greatest accomplishments, according to him, were the births of his two sons, (the late) Marc Woodson and Alex Woodson.
Terry was preceded in death by his parents Velma and Marshall Woodson; siblings Don Ray and Bill; and his son Marc. He is survived by son Alex Woodson and his wife Ronnie; Terry's partner in the home of 20 years Terri Thompson and her daughter Kristy Holt; grandchildren Brennan and Mallory; and siblings Marshall, and Wilma Woodson.